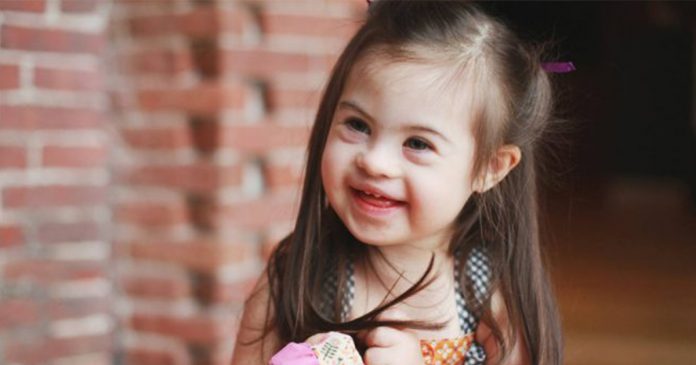 For most parents, it is always difficult for them to let go of their children especially if they are special needs children. Multiple thoughts will come into mind thinking of every possible way things can go wrong.

For Tina Szocik, from Massachusetts, USA, she has experienced the same feeling as well. Szocik, a mother of three takes very good care of all her children but she is especially protective of her 3-year-old daughter, Gigi who was diagnosed with down syndrome.

Being over-protective, she rarely lets her daughter go out without her as she feared for her safety. This all changed when Gigi brought home a flyer from school.

Szocik is especially protective of her 3-year-old daughter, Gigi who has Down syndrome

She was coming home from school when Szocik suddenly noticed a flyer for the Snow Ball dance inside her folder. The dance was an event for children ages 3 to 6. It is a drop-off event so parents won’t have to accompany or chaperone their children. Knowing this, Szocik crumpled up the flyer and threw it out.

She won’t allow her daughter to attend any event without her as she was worried for her safety. Gigi had only just turned three a few months ago and before that she could hardly able to walk.

“She can’t go, she’s 3 and has Down syndrome. There’s no way I’m dropping her off at a dance on a Friday night,” Szocik told The Mighty

About a week after the incident, Szocik ran into the school’s director. She reminded Szocik about the event and informed her that it should not be missed. When Szocik doubted the suggestion, the director insisted and that she should “absolutely send” Gigi as it is a sweet event and everyone loves it.

She began to reconsider her decision. She knew that the teachers running the event would be kind and respectful to her daughter. “Every morning we walk into school and all of these unfamiliar faces — unfamiliar to me — greet her by name at the door. It’s obvious they appreciate her. But still, I had so many concerns running through my head,” said Szocik.

“That’s a lot of responsibility they’re taking on to have Gigi at this event. She’s well behaved, but isn’t it my responsibility to decide if it’s too much and not safe?” thought Szocik

“Am I overreacting? Maybe I need to loosen the leash just a little,” thought Szocik

Eventually, she decided that it is for Gigi’s best interest to attend the dance. She felt that it wouldn’t be right for her to keep her daughter away from participating any event just because of her ‘disability’. Furthermore, she hoped that by attending the dance would make her become more inclusive.

“As a parent of a child with Down syndrome, all I want is for her to be included,” said Szocik

On the day of the event, Gigi got dressed up and her mother took her to the Ball. Her mother took a few pictures of her daughter on the red carpet. Everyone greeted her and praised her beautiful dress.

Szocik left her daughter and took the rest of the family for pizza. An hour and a half later, she went to pick her up and arrived just as she was finished dancing. Gigi took a picture in the photo booth with some friends, and they hug her as she was leaving.

“If only I could have been a fly on the wall. I can imagine the fun she had … that night was an example of true inclusion, and I was so thankful that her school gave their students this opportunity,” Szocik said

The next day, as Szocik was sending Gigi to school, a few of the teachers as well as a parent, greeted her and told her how much fun she had that night and how they enjoyed watching her dance. “It’s hard to believe that less than four months ago she wasn’t even walking, and now she’s dancing,” Szocik said.

Suddenly, as she heard them talking about her, Gigi decided to start dancing again. For Szocik, it was truly a great beginning for her and she hoped that her daughter will continue to lead a happy life doing what she loves.

Love this article? Share it with others to spread the awareness of down syndrome. Remember to always make them feel included and loved.