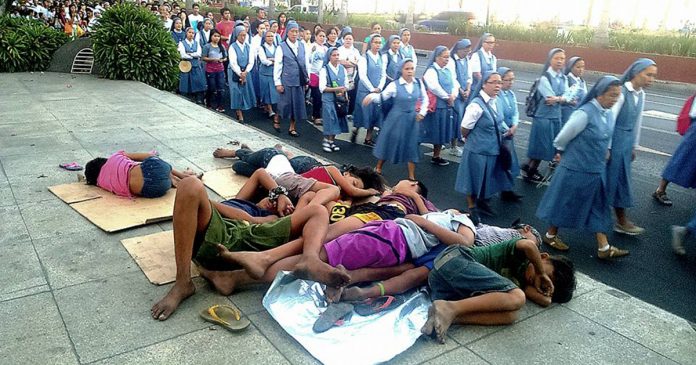 Irony in the broadest sense is a rhetorical device that is the contrast of what is said and what is meant. It is an incongruity between what is expected and what actually occurs. Irony can be found in the case of this photo, which was taken by a freelance photographer named Jonple Baltar, of nuns who walk nonchalantly pass a group of homeless street children.

We often hear of major religious institutions who exhort the need to be kind to one another and to make it a duty to help our fellow human beings when they need it. It is true that most religions have their own organizations whose sole purpose is to go out and help those in need which include the sick, impoverished and people from the lowest sector of society.

The reason this photo has made rapid circulations on the internet is because many people find it incredibly ironic. Nuns are members of a religious community of women who play an important role in the public’s image of religious symbolism because they are typically thought of as having devoted their lives to carrying out charitable works.

What the picture shows is a group of nuns who pay little to no attention to a litter of homeless children sleeping on the street. Of course it is not fair to judge these nuns by just one mere photo because they may have helped countless people in their lives, but the poignant photo struck a chord with many netizens and they felt the need to react to it.

The photo was taken in Manila, Philippines where overpopulation is becoming a great concern

The image brought up differing views from the people. Some blame the strict laws of religious institutions and urged them to change their perspectives.

Some people said it was unfair to judge the nuns based on this photo alone, for example this netizen who said:

And there are others who believe that this debate on the internet over the photo is a waste of time. It is trivial and pointless to place blame or defend the group of nuns because the fact still remains that there are still children in need of care and protection. 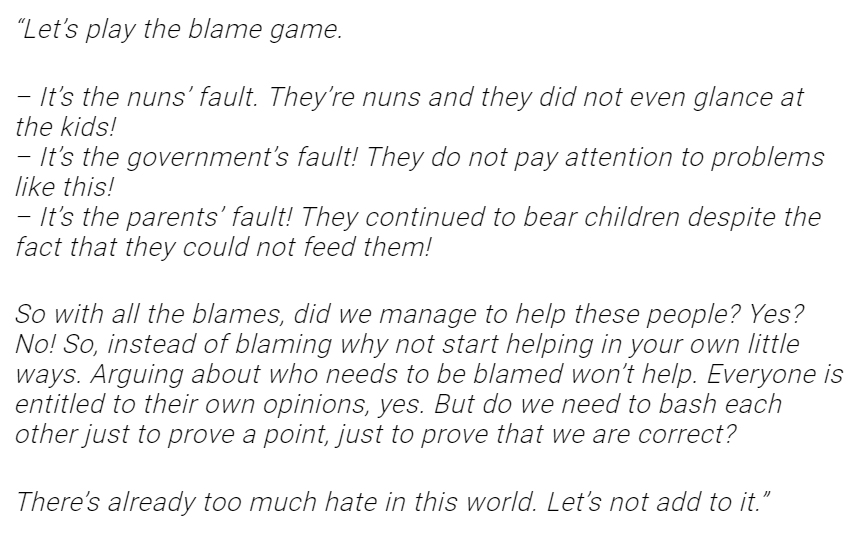 This photo was taken in Manila, Philippines where overpopulation is a growing problem. It is interesting to note that the Catholic church remain in opposition to the government’s plan to implement family planning and contraception. This could be all the more reason that a great deal of netizens were outraged at this picture.