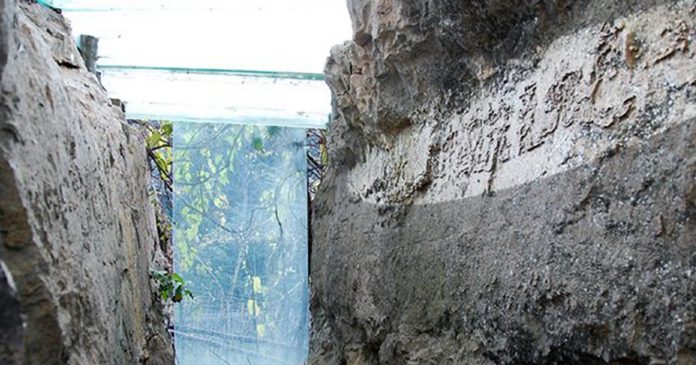 We have all heard the saying: “The writing’s on the wall,” right? It means that danger is imminent—but there’s no actual writing on the wall; it’s just a saying. However, for the Chinese Communist Party (CCP), the writing literally is on the wall, and it spells the regime’s end.

In Guizhou, China, an incredible discovery was made in June 2002.

The Duyun international photography exposition held an expo in a remote area known as Pingtang National Geological Park, and staff member Wang Guofu discovered the stone during a cleanup 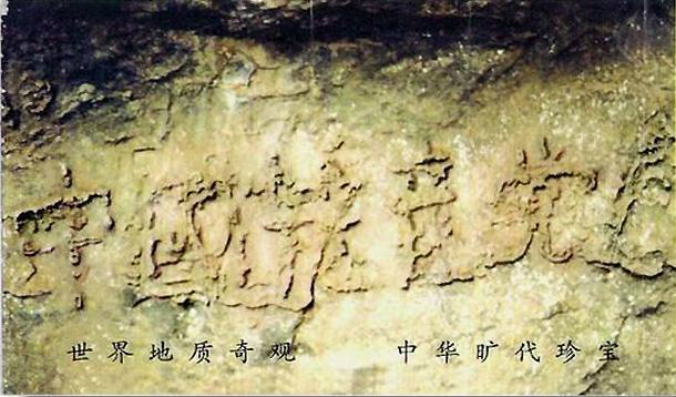 High on a mountain top, a 270-million-year-old stone had split in two, revealing a “hidden message,” which was enough to send chills down the spine of any Communist Party member. The message, “The Chinese Communist Party Perishes,” can be clearly seen in natural stone formation, in Chinese lettering.

The megalith, weighing over 100 tons, and dating from the Permian Period, fell from a height and split into two sections, revealing the hidden message.

The two sections are 23 feet long and 10 feet high, with the Chinese characters a foot high, and clearly visible

A team of 15 scientists, including Li Tingdong and Liu Baojun of the Chinese Academy of Sciences, and Li Fenglin of the China University of Geosciences, examined the stone and concluded the stone’s writing was a natural formation, and not engraved by humans.

Liang Heng, vice-editor of state-controlled newspaper the People’s Daily, visited the site, and in 2003, he wrote: “People may often discover that white clouds may appear to look like dogs, or something looks like a person or a beast, a picture or a chart, however, all such things are restricted by the appearance of the picture. If today a megalith suddenly can write, speak, carve, develop writing technique, or use political terminology, how are people able to believe that? Do they even dare to believe that? However, facing these two pieces of the split ‘hidden words stone,’ we have no alternative but to believe.”

The rock, which fell from the high mountain above the Zhangbu river valley, split on impact with the ground below, revealing the “hidden stone message” 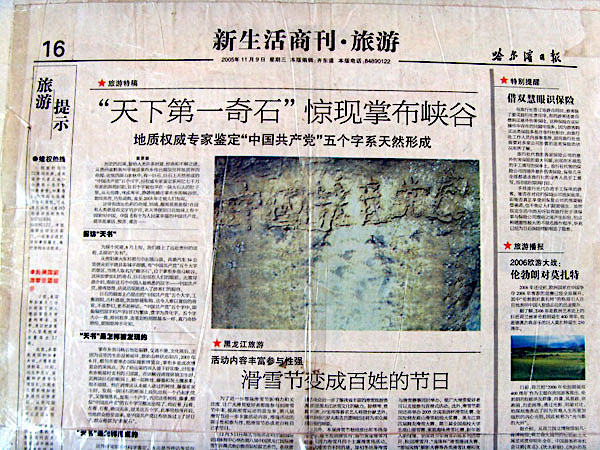 At the time, official media outlets in China, including People’s Daily, CCTV, Guangming Daily, China International Broadcasting station, Travel Satellite, Technical Daily, Sina.net, Sohu.net, New China, Yahoo, and Eastern Net all reported on the characters found on the stone—but they omitted the last character, “perish,” which is the only character that appears larger than any other character on the rest of the stone. 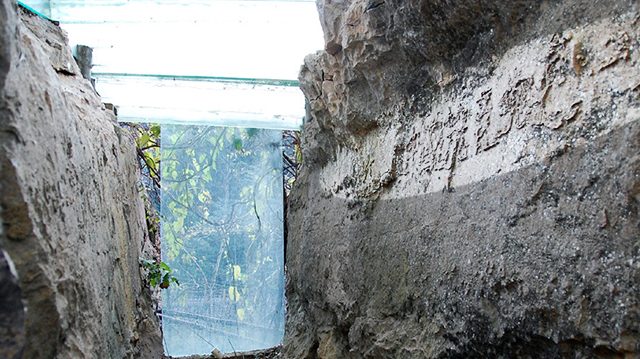 In fact, the only accepted version in China is the five-letter version—“Communist Party of China.”

According to the latest figures from “Tuidang,” the Quit-CCP Global Service Center, 298,004,652 people have renounced their affiliations with the Chinese regime.

“Tuidang (退党) in Mandarin Chinese means to ‘withdraw from the Party.’ It is the act of publicly renouncing the Chinese Communist Party (CCP) and its affiliate organizations: the Communist Young Pioneers and the Communist Youth League,” reads a statement on the Tuidang website.

“Tuidang emerged shortly after the Chinese edition of the Epoch Times newspaper, based in New York, published the Nine Commentaries on the Communist Party in October 2004—a series of editorials explaining the censored history and tyranny of the CCP. The Nine Commentaries describes how Chinese people have suffered numerous oppressive political campaigns and social upheavals under Party rule for over 65 years, resulting in an estimated 60 to 80 million unnatural deaths.”

Once a person becomes clear on the murderous nature of the Communist Party, it’s totally understandable why they’d want to disassociate themselves from it. The number is fast approaching 300 million. Wouldn’t you say that is a disaster for the CCP?