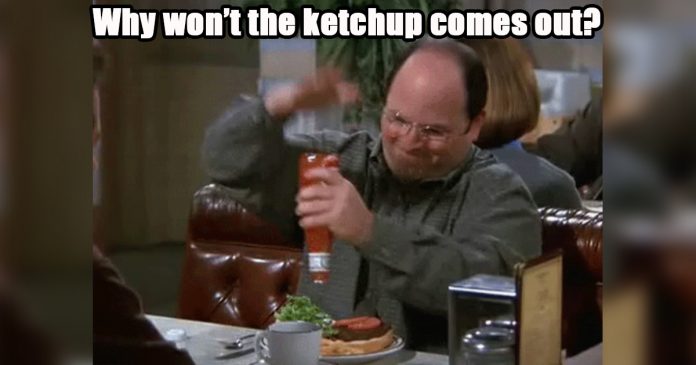 People have enjoyed commercially produced products for over a century. Some of the staples found in any home pantry are condiments, more specifically, ketchup and chili sauce. The chili sauce is a very versatile ingredient as it can be put on the side of most dishes and cooking.

Most of us would want to use the sauce to add in a more spicy taste from the original dish. However, some chefs do use the sauce as a main ingredient in some of their cooking. Consumers prefer to buy these condiments which come in a glass bottle as compared to the squeeze one although it can be a nightmare to get out.

The most common way of egging the sauce to come out is by turning the glass bottle upside down and slamming your palm on the bottom repeatedly. This will only result in two possible outcomes:

Scenario one, nothing comes out as you sit there staring at the empty plate.

Scenario two, the content of half the bottle will splurge onto your plate all at once and it will look like a massacre.

There is no in-between!

Well as it turns out, turning the bottle upside down and hitting it from the bottom will not do you any good. In fact, it is actually counterproductive as it forces the contents of the bottle inward.

However, there is a way to let the sauce flow out of the bottle with ease. The trick is to have air squeeze in on one side of the bottle neck to allow the sauce to come out.

Both chili sauce and ketchup are technically soft solids and do not have the tendency to flow like regular liquids. According to a video by George Zaidan which he showcased on TED-Ed, the sauces thickness and viscosity is dependent on a few factors.

The thickness and viscosity of the sauce change based on how long, how hard and how fast you try to push the contents out of the bottle

According to Zaidan, when you try to hit the bottle softly, it will not work because the sauce will remain in a solid state resulting in an empty plate. On the other hand, if you were to hit it hard with the palm of your hand, “the spherical particles will break down and flow too easily out of the bottle” and this will in turn lead to the mess we are all too familiar with.

The proper way to ensure you get the amount of sauce you desire with ease is simple. You will need to hold the bottle at an angle as compared to straight down, and tap the neck instead of the bottom.

A few practices and hey-presto, you will have control over your sauce bottles! You can thank us later for this brilliant tip.

Watch the video below and try practicing the method based on the instructions given.