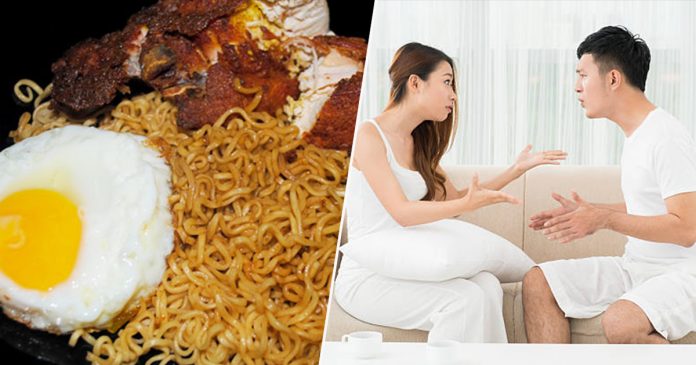 It is only natural for us to feel compelled to save as much as we can from our income in preparation for the future. This applies especially to students who sometimes live frugally in order to save up and pay their tuition fees and other essentials.

Due to this understanding that all students are in the same boat and the prevalence of discussions on gender equality, the perception that men should pay for their girlfriend’s meal is outdated.

It is becoming increasingly normal to see couples split the bill and sometimes even seeing the lady paying for the meal. This practice of course, differs from couple to couple as each will have their own preferences.

A Malaysian girl from the University of Tunku Abdul Rahman (UTAR) recently posted on the dedicated confessions page of the university the reason why she had to break up with her boyfriend and it is quite shocking. The post went viral as it sparked much debate among internet users.

She started off her post by writing, “If you have a boyfriend who is always super calculative towards you and would even ask for a few ringgit back for the food he had bought for you, do you think your relationship can still go on?”

She details the incident which urged her to write the post and also to vent her frustrations. The post continues, “He bought a packet of noodles for me which costs RM5.50 ($1.40), so I paid him back but he said that it was not enough as he had added extra noodles for me which costs an additional RM1.50 ($0.38). So I immediately took out RM2 ($0.50) to return his money. It’s not that I don’t want to pay him, but he didn’t tell me that he got additional noodles.”

The girl then started thinking to herself saying this was not the first incident where her boyfriend was being miserly. She says “Actually, similar incidents have happened several times. I’m your girlfriend, do you need to be so calculative about that few ringgit?”

“Also, this month’s petrol prices increased, so that day he reminded me that we went to Ipoh to watch a movie last week. Immediately, I took out RM20 ($5.11) from my purse and told him it was for the cost of petrol. At first he refused to take the money but I insisted and he accepted the money.”

The girl then recalled another incident where her boyfriend had offered to fetch her from a bus stop when it was raining heavily. She was happy and warmed by his gesture, until the next day when he decided to try and charge her for that trip.

“The next day, he told me that normally he would share the fuel costs with his other friends who carpooled along with him to class. Then he asked me, ‘But I’ve picked you up previously so how do you suggest we share the cost?’ I told him that he had only picked me up once and if he really wanted the money, he could ask his friends what to do.”

She was utterly shocked by this sentiment. Of course the girl understood the fact that they were both students and neither of them was working at the time. She never questioned paying for her own meals when they were out because she found it only logical to do so but this was taking it too far.

“After he consulted his friends, they told him that it was fine if I didn’t pay since I was his girlfriend.”

“I’ve tried discussing it with him but he doesn’t understand the issue because he said his friends were all the same. Since we were using our parents’ money, we should make it clear. Does he really think that he can get a girlfriend without spending a single cent on her?”

It came to the point where she could not reason with him and couldn’t take it any longer, they both parted ways

“Sorry, he can say I’m materialistic but I cannot accept this kind of relationship. I hope he will be able to find a partner who can fulfill what he wants because I can’t.”

“All I want is a boyfriend who isn’t being so calculative with me by asking me to pay a few ringgit because the meal had additional noodles, eggs or meat.”

Hopefully they find a partner who is better suited for them

The post went viral almost overnight with many netizens taking a stance and defending each of the individual’s behaviors. Some even shared their own experiences and many could relate to the situation.

Comment below and let us know what you think!