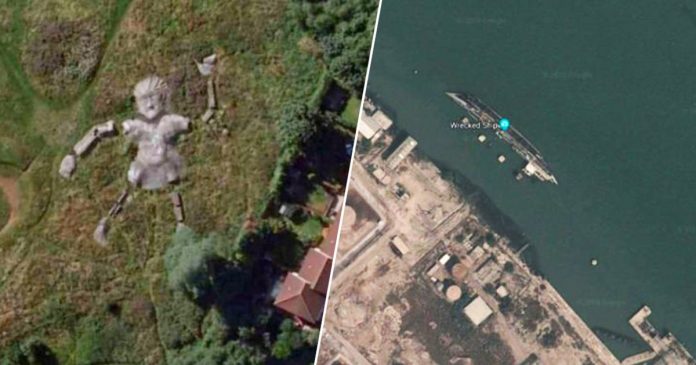 If you’re a tourist or simply want to get a feel of how certain places look like, then you may have used Google Earth a couple of times. Google Earth is a free program which is hugely superior to static maps and satellite images. It allows users to virtually “fly” over the globe and view the earth in high resolution graphics.

Users can essentially visit any country they want and stroll through the streets and sandy beaches by using this program. With this being said, the world is a vast place and there are bound to be things that you come across which cannot be easily explained or downright terrifying. Here are 12 strange Google Earth images that depict strange occurrences on earth which can sometimes only be seen from a birds-eye point of view.

#1 – Here is a five-pointed star surrounded by a circle which is located on the southern shore of the Upper Tobol Reservoir. This image is extremely strange because there are almost no signs of human habitation in the area. In fact, the closest settlement is the city of Lisakovsk, about 12 miles to the east. According to an archaeologist who has worked on this area for years, Emma Usmanova believes that “It is the outline of a park made in the form of a star.” 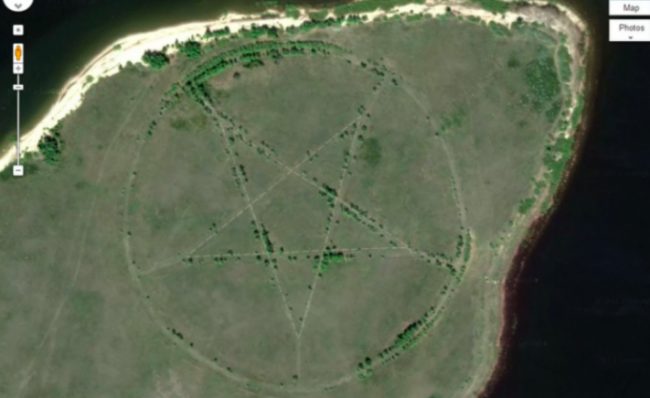 #2 – NASA’s Aqua satellite captured this image of Lake Urmia with a deep green hue but a part of the body of water was filled with algae and bacteria that turned it into a terrifying blood red color. This red river in Sadr City, Iraq caused a stir of conspiracies when it was first released but thankfully it had a perfectly logical explanation behind it. 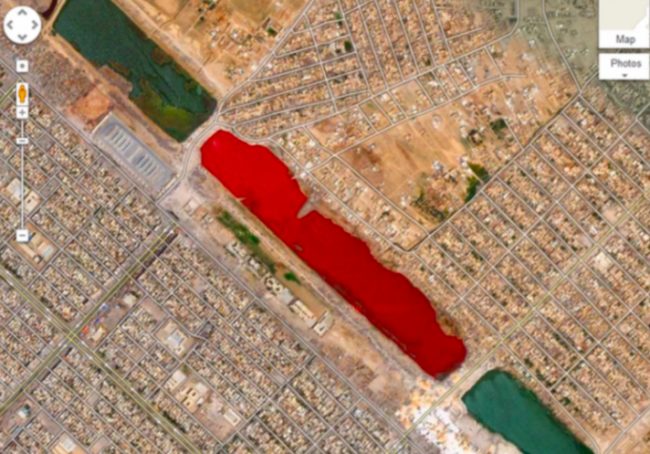 #3 – There is also a famous image of a shipwreck found on google earth. It was discovered  in Red Sea and the Bolivian ferry named S.S. Jassim could be seen in the depths of the water off the coast of Sudan. The ferry sunk on the Wingate Reef in the year 2003. 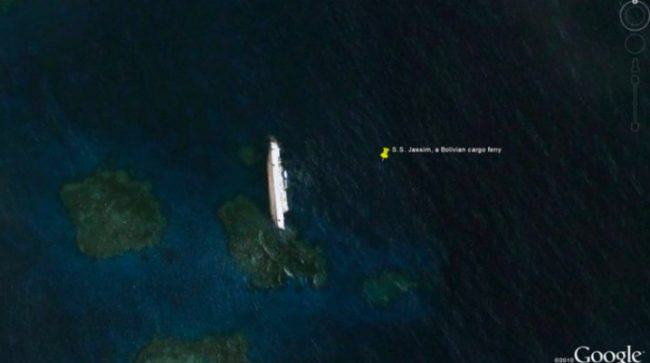 #4 – There are countless geographical wonders that exists on earth. One of which includes this one located near Medicine Hat in the southeast corner of Alberta, Canada. This image which is reminiscent of an Egyptian face is actually a valley eroded into the clay. The face has been dubbed as the Badlands Guardian. 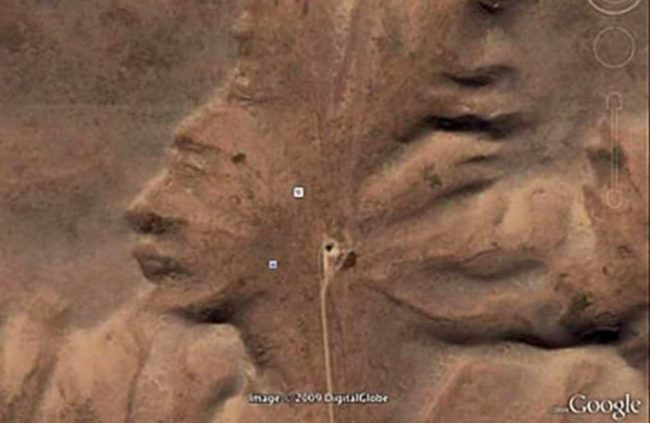 #5 – This massive 100 ft play structure was designed in 1976 by Jimmy Boyle while in prison. It was constructed by unemployed adults and youth of the area under a Festival Society’s Job Creation Scheme with voluntary advice from professionals. mammoth structure is the longest concrete sculpture in Europe but it now lies neglected and threatened with demolition. #6 – This next image shows a jetty at the Queen Beatrix Park, Almere Stad which is a district of Almere, a city in the Netherlands. It is spooky because it looks as if there is a trail of blood leading up the dock. But the supposed “blood trail” is nothing more than water dripped onto the wood by a harmless pooch who went for a swim. 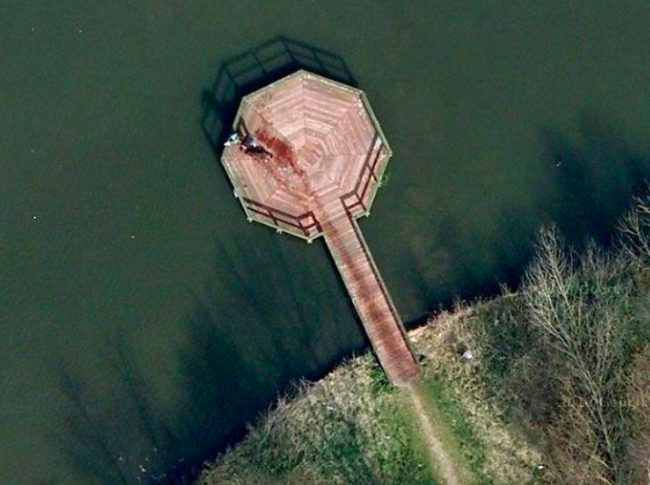 #7 – You can see image of a ship wreck when looking at the Shatt al-Arab waters in Basrah, Iraq. From an aerial view it is much more prominent. According to niqash.org, the Iraqi Port Company estimates that there are about 36 shipwrecks in the area and this image shows just one of them. #8 – This crater which located in the desert of Arizona, has a diameter of about 1,200 meters and a depth of 170 meters. You can see how big the crater is from the air. This crater was estimated to have been created about 50,000 years ago when a 150-foot lump of iron and nickel from the asteroid belt between Mars and Jupiter, crashed into earth. 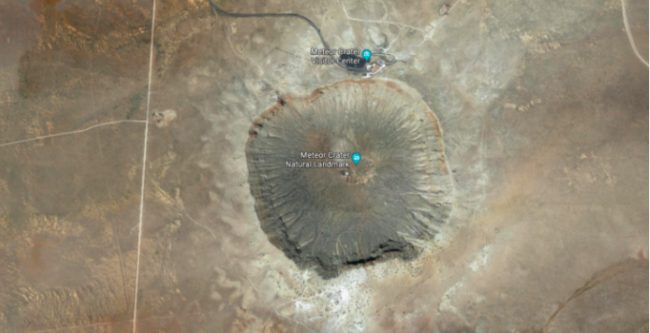 #9 – This beautiful image is actually the largest hot spring in the United States. Grand Prismatic Spring is located in the Midway Geyser Basin in Yellowstone National Park. The vivid colors in the spring are the result of microbial mats around the edges of the mineral-rich water. 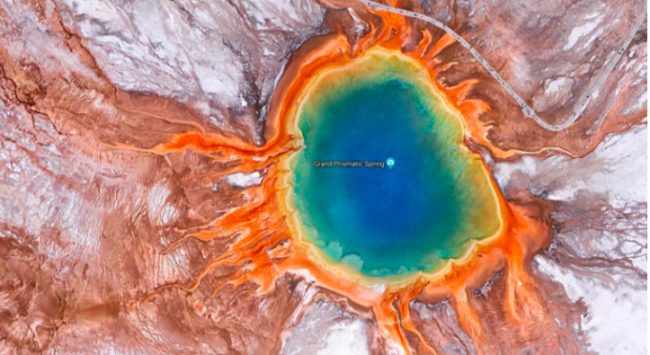 #10 – This magnificent view is of Fort Bourtange which was built in 1593 in the village of Bourtange, Groningen in the Netherlands. The fort has now become a museum, but it looks amazing and extraordinary from the air. #11 – Alma College was a private school of women Thomas, Ontario, Canada and it was  built in 1878. Unfortunately, the college was destroyed in a fire which happened in 2008. Two men were arrested and charged for causing the fire but their motifs were unknown. The building’s fire was captured by the Google satellite picturing the extent to which the fire has destroyed the building. #12 – This Google Earth image which was taken in Michigan was captured in a timely manner. It shows the scene of a terrible car accident involving multiple motor vehicles. 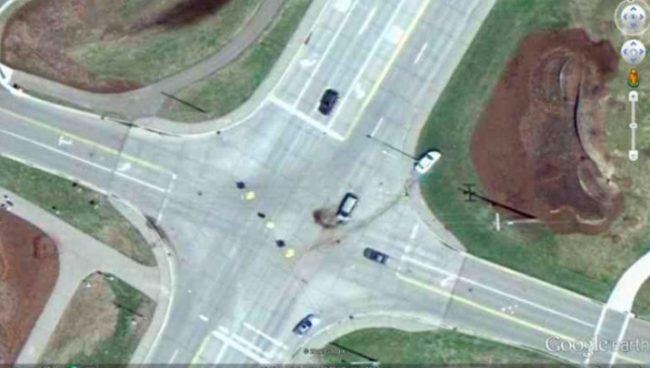 These talented kids show off their powerful vocals while singing “You...