He might be a small boy but this little kid looks like he has more charm than some of the biggest superstars in the world! A toddler named Jackson was singing a rendition to George Strait’s “Heartland” to his “imaginary mega concert” but he did not know that his father was watching his little act from behind.

In the video, little Jackson was facing the yard with his back against the window. The boy was caught singing Strait’s smash hit to his imaginary audience.

Dresses from head to toe in style of the king of country music, Jackson rocked brown cowboy boots and a black cowboy hat while passionately strumming his cute blue guitar 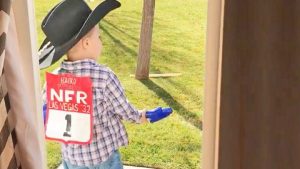 Jackson’s father who thought that his little concert hilarious and entertaining later posted the video on Facebook. And looks like he was not the only who adored Jackson’s performance!

The video has been viewed over 25 million times on Facebook alone.

“Caught him in his element. Performing to his imaginary sold out stadium!” the proud father wrote on Facebook.

The netizens certainly love Jackson and it is not hard to see why. This little boy might be the next greatest country musician when he grows up!

Parents of a 4-year-old girl are horrified when they find out...