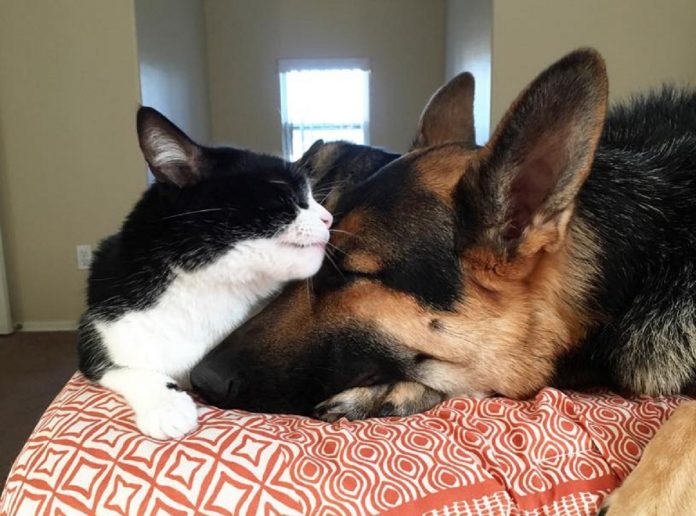 Cats and dogs have always known to have a prey-predator relationship since dogs have a natural instinct to chase small animals that flee from them, a natural response from cats when they see dogs.

However, this lovely duo proves that cats and dogs are not always sworn enemies. Sometimes, some people even consider them as close brothers!

Meet Baron the German Shepherd and Alvin the cat who have the most unlikely friendship.

It all began when Alvin was adopted by Eliza and Bernard Richardson after they found him at a pet boutique.

“We settled on a cat even though we weren’t cat people at all,” Eliza said.

However, soon, Alvin began to change their mind about cats since he is quite playful and social. Fast forward two years later, the couple adopted Baron

He was only eight weeks old at that time but growing up with Alvin has made the two became more comfortable and playful around each other.

Surprisingly, Baron is also playful and social like Alvin so the two quickly clicked as they are so like-minded

When they first met, there was not much cuddling and kisses from Alvin but now, the two brothers cannot go through a day without cuddling and grooming session with each other

Nevertheless, they, too, sometimes fight like brothers but when they do, they know it is better to be with each other rather than staying angry