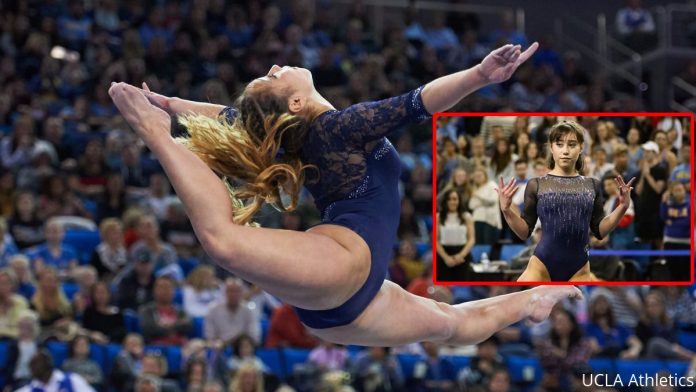 Meet Katelyn Ohashi, the 4’10” gymnast representing UCLA has given some of the best performances on some athletic championships including the National Collegiate Athletic Association (NCAA) tournaments have ever seen.

Katelyn has helped her UCLA gymnastics team to defeat Oregon with her passionate floor routine which has also earned her a score of a perfect 10.

Her gymnastics team was already on their way to victory before Katelyn delivered her smashing performance but there was a high pressure for her as they needed her to score 9.9 to achieve the all-time best score of the season

In spite of the pressure and high expectations, Katelyn managed to bring home a perfect 10 for her flawless floor routine.

With every move and split, she did it with a huge smile on her face as the crowd cheered on her

The perfect score was the fifth perfect 10 score that UCLA achieved for the season!

Thanks to her winning floor routine, she was awarded the Pac-12 Women’s Gymnastics Specialist of the Year award with a shining record of the average score of 9.925, three perfect tens and just one score under 9.8.

Katelyn has also finished the season with the first rank in the nation in floor exercise.

Once, she scored above 16.0 for the 2011 US nationals, a scored that is certainly hard to beat by other gymnasts. Even the gymnast from China, Deng Linlin won the 2012 Olympic with a score of 15.6

Born in Seattle, Washington, she has always been in the gymnastics world since she was at a tender age.

In 2011, Katelyn won the US Junior national championship when she was only 14 years old

after an awesome time in alaska working @beamqueenbootcamp and missing our original flight from seattle to LA, this is my mood to be back home. pc: @shardelaophoto

She is known for her stellar records of not scoring under 9.8 for every routine. Nevertheless, she has also had her fair share of serious injuries where she had to retire from elite gymnastics.

However, this strong-minded athlete said that it is important to always move forward and not to overthink when the hard times come

Even if she had a minor slip while completing her floor routine during the championship, Katelyn admitted that she never let the mistake to stop her from giving a strong finish at the end of the routine.

“It’s kind of easy just going up and finishing strong and hitting the refresh button is what we always tell each other to do,” she commented to Flogymnastics.

In spite of that, Katelyn remains humble as she thanked the team’s superb teamwork and supports towards each other as one of the main reasons why she and her team managed to score a victory for the championships.

“This is probably the best team that I’ve been on, and I feel like we’re very cohesive.”

In case you haven’t watched her award-winning floor routine, check out her incredible performance below where she dances to Michael Jackson’s songs and nails a kick-ass routine

She may be able to lift heavy tires, but it’s her...