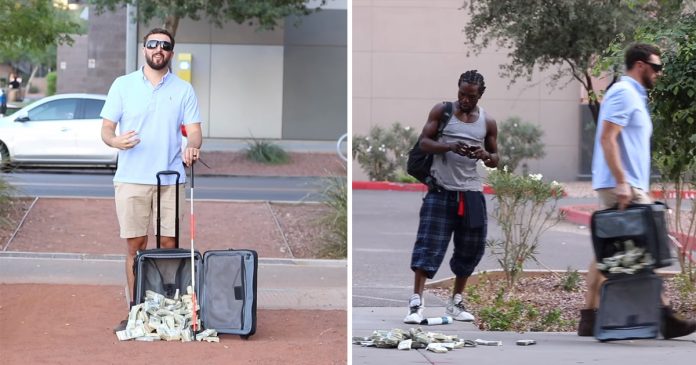 What happens when a blind man accidentally drops some of his things out of his suitcase and what happens if the things are actually a bunch of cash?

Well, BigDawsTv wanted to find out if the public would genuinely lend a helping hand to a blind man if he dropped some cash on the street or if people would take advantage of his disguise.

For his social experiment, the man posed as a blind man walking down the street carrying a suitcase loaded with cash

To test the passersby honesty, the man later intentionally let the cash out of his suitcase after passing the unsuspecting passersby

What BigDawsTv found out later was quite surprising!

Apparently, almost all of the passersby that he passed by genuinely helped him and put all the cash back into his suitcase

While there are some of them who looked visibly stunned with the prank, nearly all of them helped him.

Except for one very unfortunate scene where a man secretly hid a bunch of cash in his pocket.

While it is true that the materialistic world has turned many people into greedy and selfish individuals, this social experiment proves that there are still honest people out there who have nothing but the best interest in helping people in need of help.

Are you one of them?

Watch the full video of this social experiment here