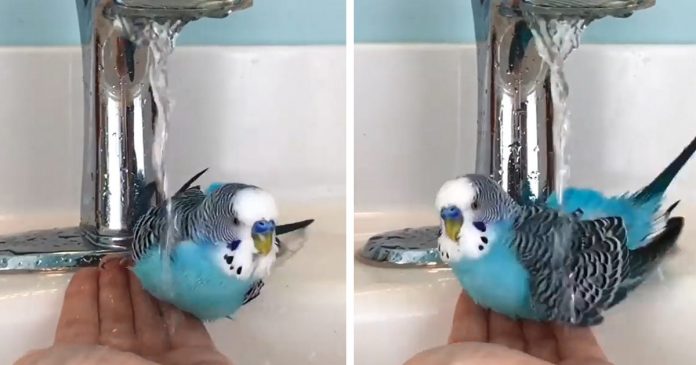 Ranking just behind dogs and cats, budgie birds are a very popular choice for a domestic pet and it is not hard to see why—this bird species is just so adorable and gorgeous!

Also known as a common parakeet, budgerigar or shell parakeet, budgie bird is one of the smallest species in parrot family with a length of just 7 to 8 inches long from tip to tail.

While most budgie birds have green and yellow feathers, other colours like blue and white are also some of the varieties known for this species.

They are also very affectionate and love playing with water, just like this little budgie here

This budgie especially loves taking a good shower and it will never miss a chance to do so whenever its owner turns on the tap at the bathroom sink.

With some help from its owner’s hand, this budgie bird can be seen having a fun time splashing and enjoying the water

Unlike some pets which can be very hesitant to take a shower, this budgie bird is quite the opposite!

Apparently, this bird species loves taking a shower and flapping under a running tap

We bet that the shower must have been very refreshing for this cute budgie bird!