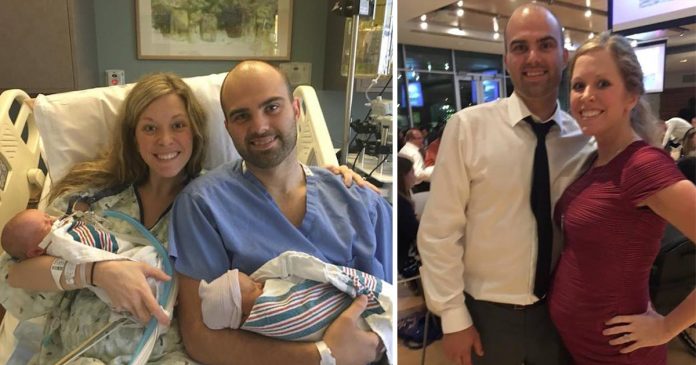 Nicole Ziesemer had just gone through a very long and complicated childbirth when she surprised everyone in the labour room that there was a second baby.

In a viral Facebook post shared by Matthew Ziesemer, his wife Nicole went through a terribly difficult labour of nearly 48 hours to deliver their baby on December 30, 2017.

Matthew wrote, “My beautiful pregnant wife Nicole Ziesemer woke me up Friday early morning at 12:30AM to tell me her water broke. Yes, that was 4.5 weeks early as we were due on January 30th.

“So we called our midwife because we are planning on doing a Home birth but since the babies were less than 36 weeks we couldn’t do a Home birth.

In his emotional post, Matthew wrote how his wife suffered for nearly 48 hours before their baby, Cade Matthew Ziesemer was born

However, the difficult childbirth did not end there as Nicole informed the midwives that she could feel a second baby was coming

“The OB stitched up my wife’s small tear and then started to work on the placenta and to EVERYONES surprise in the room she said there is a 2nd baby in there and we all crapped our pants and then all hell broke lose.

“The entire floor of the hospital was in our room it was packed just making sure everything was going to be ok. It was crazy!

“So Nicole thinking she was done has to push again and now her epidural had wore off so her back pain was awful but she did it and at 11:05PM December 30th Cade Matthew Ziesemer (5 lbs)was born!

Even though the whole childbirth was a rollercoaster of emotions for both the couple and the midwives, it ended happily with their babies being born healthy

“God definitely has a greater plan for us and showed us that we don’t control anything in our lives. It is truly up to him and we have to trust that whatever curveball he throws at us is what we need in our lives,” Matthew reflected on the experience.

Read more of his long post about the childbirth here