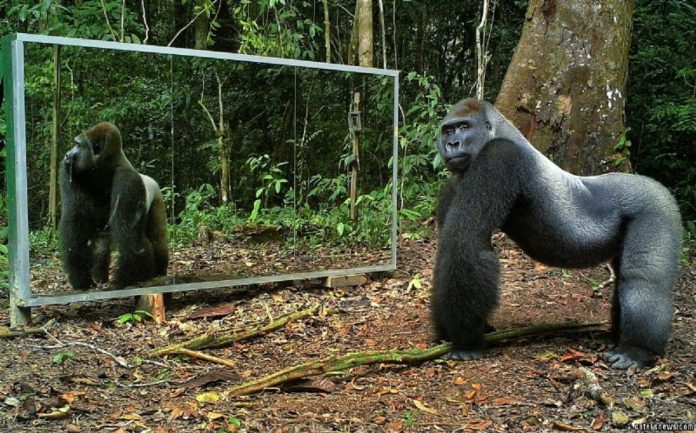 Humans are able to recognise themselves when they look into a mirror but can animals do the same?

Unlike humans, animals mostly identify whether a territory or object belongs to them or other animals through scent, sound, and sight. However, one question remains unsettled is whether animals can recognise themselves if they look into a mirror or not.

In an attempt to find out the answer, French photographer Xavier Hubert Brierre travelled to Gabon to set up a large mirror in several locations in the jungle

The cameras worked by detecting any movements of wild animals which walked nearby.

While the mirror test was not exactly reliable enough to tell whether scent-centric animals like dogs and cats can recognise themselves on a mirror, the test can tell a lot about animals which are dependent on visuals.

Meanwhile, one of two leopards which passed by the mirror extended his paw towards his reflection.

Most animals react to their reflection on a mirror with aggressive behaviour but there are some animals that seem to be able to recognise themselves when looking into a mirror.

Some even went further to flirt and seduce their reflection, thinking that the reflection was of opposite gender like what happened to one female leopard

Whether or not these animals could recognise their reflection, their reactions are certainly epic and hilarious!

Watch their reactions in this video here