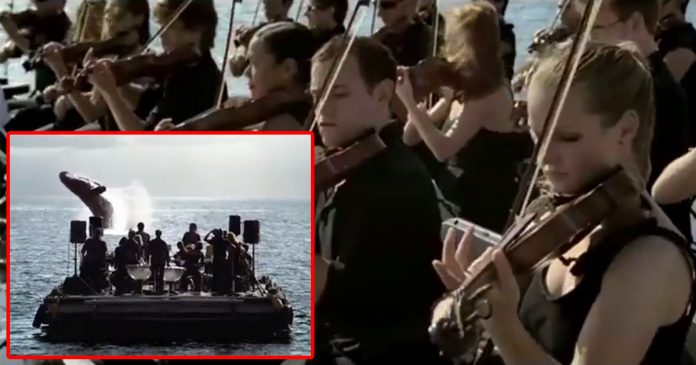 Music is a universal language. It transcends culture and language, and these orchestral musicians show that it also transcends species.

In a headline-grabbing video, a group of orchestral musicians set adrift in the middle of the ocean with their instruments and music scores to play a majestic piece—Whalesong.

Their intention is none other than to see whether music can bring whales to the surface of the ocean.

In the video, the orchestral musicians can be seen drifting away in the ocean as they begin to play the intricate and eerie piece

The song may not sound like other classical pieces as it was composed to mimic how the humpback whales communicate between each other, resulting in a tune that sounds like a song.

It does not take long before they receive a response

Whales produce odd squeaks, groans, clicks, and moans, as can be heard in the piece that the orchestral musicians play

It is a form of communication that they use to communicate in the vast ocean.

Hence, when the musicians play the exact same sounds in the middle of the ocean, the whale gives a beautiful response to the music

The video which was made viral after Facebook page Thinking Humanity posted it on April 13, 2016 gained 3 million views in just a week.

While the page portrays it like a genuine event, the video is actually a commercial for Optus, an Australian telecommunications firm

Even though it is a commercial, the advertising agency, M&C Saatchi said that it was inspired by the real ongoing researches that scientists at The University of Queensland conduct where scientists decipher the song that whales use to communicate.

This Loyal Dog Desperately Howled and Scratched at the Coffin of...

Heartwarming portraits of young boy and his buffaloes win 2018 Asian...