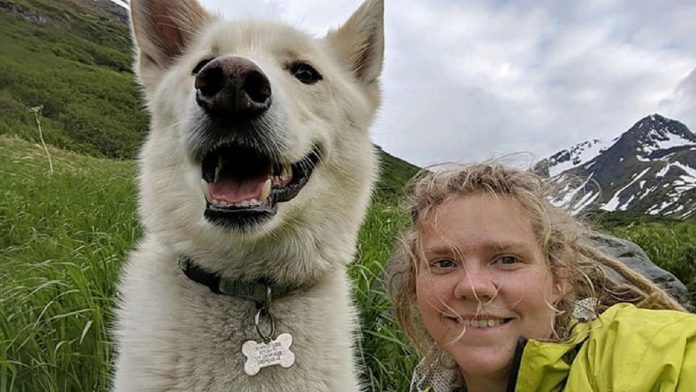 Deaf college student Amelia Milling thought that her dream vacation was over the moment she opened her eyes and found herself bleeding and bruised after falling 100 metres down the hill.

The 21-year-old student was hiking on the trail at the Crow Pass Trail in Alaska alone when her hiking poles broke and a wrong step caused her to roll down the hill and crashed into a large boulder.

In an interview with CBC, the student said that she could still recall how she felt like when the wrong step launched her 100 metres down the hill

“I felt like I was flying,” Milling told CBC.

After the impact, the student found herself bleeding and bruised.

However, she realised later that a white dog suddenly appeared out of nowhere

It was when she noticed the bone tag on the dog’s neck that read, “Crow Pass Guide, Return to …” with his owner’s address

The dog, which Milling later learned his name was “Nanook” or “Nookie” never left her side for the next day and a half.

According to the girl, the husky dog continuously encouraged her to get up and walk. For seven miles, Nanook stayed by Milling’s side as he endlessly motivated her to walk.

“If he didn’t show up, I probably wouldn’t have gotten back up and kept walking that much.”

Even when Milling pitched a tent when the night fell and invited him to get inside, the husky refused to do so since the tent was small and fit only for one person.

When the next day came, Milling was surprised to see the husky patiently waited for her.

“I realized he really was sticking with me when he greeted me in the morning when I unzipped my tent. He had stayed the entire night next to me.”

The two went on another tough journey but as Milling caught hypothermia on the riverbank after falling in the water, she pressed the SOS button on her Spot Device.

The SOS button alerted the Alaska State Troopers and Milling’s mother and sister back in Tennessee. She was later rescued and sent to Anchorage for treatment.

In her interview, Milling gave credits to Nanook for rescuing her and saving her life. She is now recovering from the incident while Nanook continues his role as the Alaska State Trooper member.

The dog now carries a GPS beacon on his collar.

The Internet has fallen in love with the Dalmatian with a...