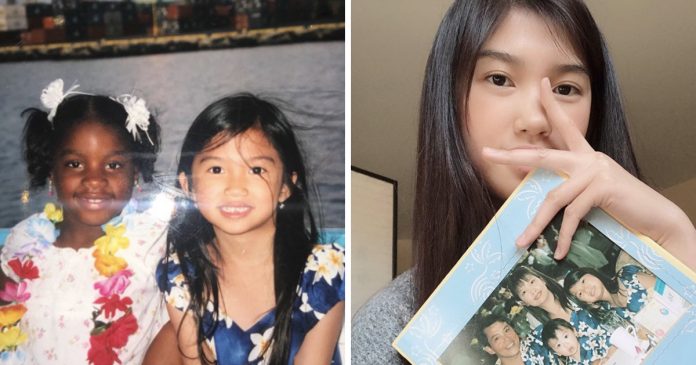 A college student who appealed to Twitter users to reunite her with a girl she met on a Hawaiian cruise in 2006 was reconnected with her long-lost ‘best friend’ in just 11 hours.

Brianna Cry, a student at Hampton University, who lives in Mississippi, shared an adorable snap of her and another young girl in floral outfits, taken on the Honolulu dinner cruise 12 years ago.

Brianna said the pair instantly became besties on the family trip and wanted to find out how she had been.

She appealed, “Hey twitter, I met this girl on a dinner cruise in Hawaii in 2006. We were basically bestfriends for that night so I need y’all to help me find my bestfriend cause I miss her and I need to see how she’s doing now. Please retweet this so we can be reunited.”

To Brianna’s surprise, her mysterious pal responded within hours with an image of her on the cruise that same night.

Biochemistry student Heidi, who lives in California, uploaded the photograph with the message, “Heard you were looking for me.”

Meanwhile, Brianna alerted her followers she had located her long-lost bestie.

“Y’all I found her wt*! Twitter is literally amazing… Omg my heart is so happy,” she wrote.

“Bruhhh it’s been literal years since I was last on Twitter and the first thing I see is a search party for my a**,” aspiring Pharmacist Heidi joked.

The news that the pair had reconnected warmed the hearts of thousands of social media users around the world.

“Okaaaay!!!…I’m not being emotional, my eyes just a bit leaky,” another said.

While one person remarked, “Well done Twitter! This makes me smile! Hope you all share memories and are able to connect now that you have found each other after twelve years.”

Brianna told BuzzFeed News they were talking privately, catching up on “life and school and everything.”

“I don’t think there were many kids our age on this particular dinner cruise so I guess we just found each other and stuck together the whole time. The other night I was going through old scrapbooks and watching vacation videos, and I saw her.”

“I honestly thought it would take at least a week to find her. The internet is so amazing and showed me that it is a small world after all,” she said.

Heidi, an aspiring pharmacist, tweeted that they will try to meet up, adding that the pair are now “homies”.

But the pair said they would need to save up before they could attempt a meet up.

While Brianna said, “We attend college on two different sides of the country but we do plan to meet again once we get our funds together.”

The viral Twitter posts have sparked scores of social media users to call on Oprah Winfrey and Ellen DeGeneres to make their reunion possible, by inviting them onto their talk shows.

While another pleaded, “@TheEllenShow please help them meet up!!!”

Young Nepalese gets attention for the most beautiful handwriting with her...