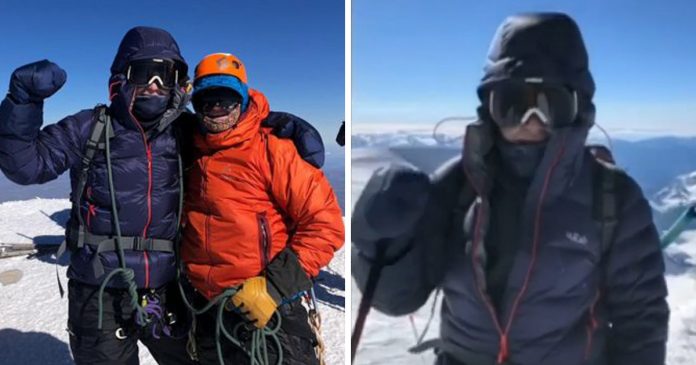 Jack gradually lost his sight over a few months due to a genetic condition in 2007. He was only 11 years old then.

Jack considers it as traumatic, but being active and sporty helped him cope, so he immediately set his sights on challenging activities, with conquering Mount Elbrus at the very top of his list.

His parents were nervous when he told them of Mount Elbrus. It was famous for its technical and challenging climb, but Jack remained firm. He loves the thrill—sky diving and bungee jumping were things he was used to.

With the assistance and guidance from four other climbers and two guides from Adventure Peaks, they reached the summit in eight days.

Jack said he needed to get used to the snow, it was his first time walking on snow and ice.

One of the guides, Paul Etheridge, taught Jack the basics on using crampons and an ice ax. Jack kept a close distance to Paul to avoid any accidents that involved Jack accidentally injuring Paul’s foot or leg with the crampon.

Because of the altitude, his heart rate increased, and he was feeling as breathless as ever.

But the feeling when he reached the peak is indescribable.

“It’s the best feeling there is.”, he told BBC.

This is an amazing achievement for any person, but Jack is completely blind. His story has truly shown us what it means by “When there is a will, there is a way.” Never give up.