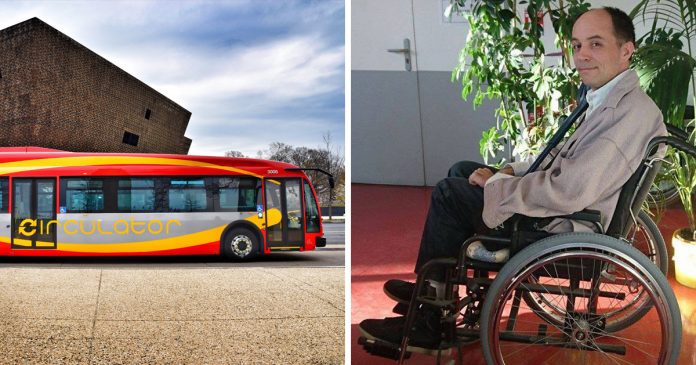 Since public transportation system can be quite unfriendly towards those in wheelchairs, it is up to the commuters to help those who requires it. However, not all commuters are kind and helpful. Recently, a bus driver in Paris was praised for standing up against rude passengers in his bus for a man in wheelchair.

François Le Berre, who has multiple sclerosis (MS), was waiting for his bus. But when the bus has finally arrived, he was unable to board and other passengers refused to move and make room for him.

Le Berre in his wheelchair.

The bus driver, operating under the state-owned Autonomous Operator of Parisian Transports (RATP) was reportedly baffled by his passengers’ behavior. In an act of empathy for his wheelchair-bound passenger and disgust for the others, he ordered all the passengers to get off.

The driver announced, “Everybody down!” as stated in Le Berre’s Facebook post. Le Berre also said that everyone did as they were told, but not without a few grumbles and complaints from a few of the passengers. The driver even said, “Everyone might need a wheelchair one day,” to the passengers.

As soon as the bus was cleared out, the driver told the passengers to wait for the next bus, and immediately went to Le Berre and told him to board. The driver then drove Le Berre to his next stop in the now-spacious bus.

Le Berre, as he waited for the bus.

Viewers all over the world applauded the driver for teaching a lesson to the passengers. Parisians even went so far as to urge French President Emmanuel Macron to honor the bus driver.

RATP has been trying to identify the unknown driver in an attempt to recognize him for his honorable act of standing up for the disabled passenger. The RATP has also released a statement stating that the driver will not face repercussions for kicking out passengers from the bus, as they consider it a righteous act.

This is a great reminder to commuters everywhere. The disabled are part of the community too, and they should not be turned away just because they are physically disadvantaged. Remember, everyone might need a wheelchair one day.