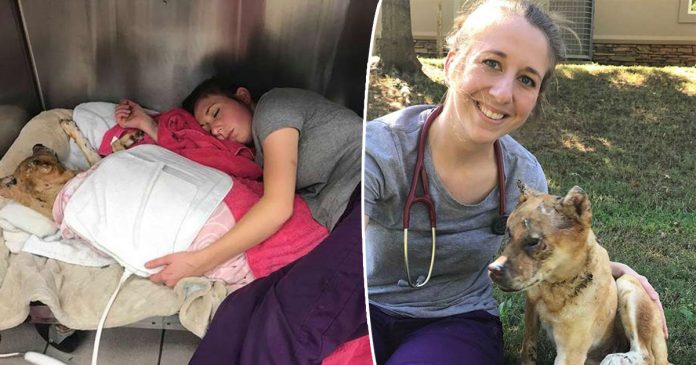 A Japanese-breed dog is forever blind after he was trapped in a family house fire. Fortunately, he survived and a dedicated vet went extra miles to take good care of him.

Taka, an 8-year-old dog was kept inside a screened porch. But a fire broke out and Taka couldn’t be saved in time.

When everyone thought Taka had perished along in the fire, the brave dog actually made it out by himself.

Sadly, his entire head−eyes, mouth, ears and belly were burnt in the process.

Dr Emily Martin, a vet at Care More Animal Hospital was there to receive the injured Taka. “We really didn’t know how severe his injuries were initially, just because we had to worry about inhalation burns.”

Upon inspection, Taka is announced to be blinded forever. His condition is so bad that Taka even had to use an oxygen machine to breath.

Taka’s family gave the dog to the clinic as he requires close attention and care to recover. It must have been a blow to Taka for not having anyone by his side.

As the hospital closes at night, Dr Martin took pity on Taka and brought him home. “I was up with him all night at my house, so the following day, we were both exhausted,” she shared.

Dr Martin was captured sleeping next to Taka in the clinic the next day. She was comforting Taka during her lunch hour when she fell asleep with the dog.

“A lot of times when animals are in pain, they’ll start biting just because they are hurt, but he hasn’t once tried to bite. If anything, he’s comforted by people.”

Dr Martin is optimistic with Taka’s recovery so far after he started eating on his own. She claims his personality has even started to show.

“He likes his belly rubs, and he loves food, so he’s a little piggy,” Dr Martin said. “He also likes to cuddle.”

Dr Martin is determined to find a good family for Taka after his tough ordeal is over.

Taka is doing well today. He has a great appetite and is more interactive. It seems like he can see a little bit, as he navigates outside very well, mostly using his smell which is on point!! So we are happy to see that. He is still being kept on high doses of pain meds and sleeps a lot. He is strong and he is a fighter. Falling in love with this guy is the easiest thing we have ever done!! ❤️❤️

This dog is taking over the internet after pet groomer gave...