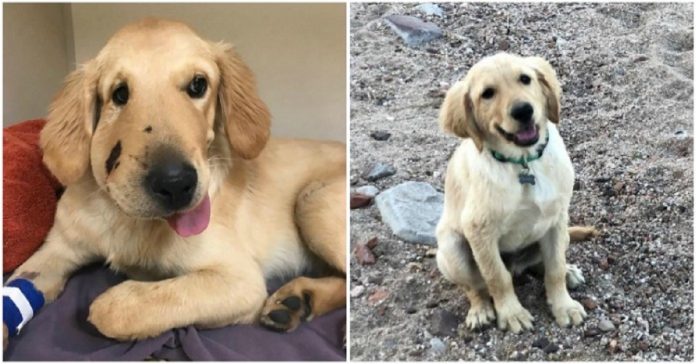 When his owner nearly walked on a rattlesnake during a hike in Arizona, in June, golden retriever Todd came to the rescue.

The fearless six-month-old pup immediately leapt in front of his owner, Paula Godwin, who has praised him as her “sweet hero”.

Describing the heart wrenching encounter with the snake, Paula shared pictures of her beloved dog, who injured his snout.

She wrote, “So this morning was up bright and early to go on a hike on 7th street carefree.

Paula went on a walk with Todd and her other dog, Copper.

“It was a beautiful morning but as we were walking down the hill I literally almost stepped on a mf rattlesnake.”

“But my hero of a puppy Todd saved me He jumped right in front of my leg were I surely would have got bit. This is what a hero looks like.”

The pictures show that one side of Todd’s face completely swollen. There is a black mark where he was bitten. Ouch!

His lucky owner said she didn’t spot the speckled rattlesnake as it hid on the road. It was almost invisible as it waited to pounce.

“This snake did not give any indication he was there. Usually if I hear that rattle I am alert and I am backing away,” she told the BBC.

Paula quickly took her poor pooch to the hospital, where he received a shot of anti-venom. He was only allowed home after 12 hours.

Not all heroes wear capes—but Todd does, at times.

“Please say a little prayer for my sweet hero,” she urged her followers.

Paula and Todd are inseparable.

“My sweet Todd for sure is my hero and I feel I have to say that the man upstairs surely is watching out for me too,” Paula said.

To say the brave pup deserves the prize is an understatement! We all need a dog like Todd in our lives.

Check out Todd accepting his award below.