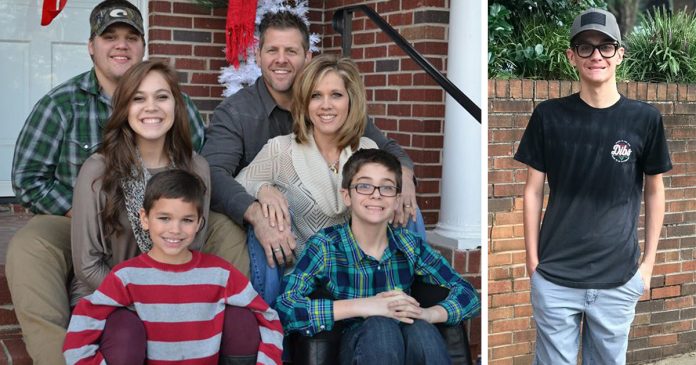 Kay Kirby is a loving mom to four kids from Boiling Springs, South Carolina. She loves her kids very much and is heartbroken every time her son Andrew eats alone during his lunch break. However, even after four years of being told that he’s eating alone, she never stopped praying and hoping for Andrew to make a new friend.

Andrew who is 16 years old, isn’t exactly in his best shape. He is an adopted son born with an addiction to crack cocaine. Andrew also has neurofibromatosis, a genetic condition that causes tumors to grow in his nervous system. He has undergone several major back and neck injuries.

Growing up, Andrew was extremely shy and a complete loner. After eating only by himself for the past four years at Boiling Springs High School, he never thought that his mom’s wish for him to make a new friend would come true!

Young Andrew with his family.

On the first day of school, Kirby texted Andrew asking if he was alone during lunch, as usual. Strangely, he didn’t reply. But when she came to pick him up from school later that day, he excitedly told her, “Mom, I didn’t eat alone! Some student council members asked me and three others eating alone to come sit with them, and said we could eat with them again tomorrow too!”

For Andrew and his mother, these students’ action means the world. Kirby posted a Facebook status for these students which read, “The thought of our son or any child eating alone everyday breaks our heart. These students may not have thought this was a big deal, but it was an answer to prayer and a great encouragement for Andrew. Thank you to those students, you made a difference today!”

Andrew and his family during a past Christmas.

Andrew’s life is about to become more fun. On a recent weekend, he even went on a movie night with his new buddies.

This amazing story caught the attention of U.S. Senator Tim Scott, who praised the students for their kind deed in a video. He said, “There is an old scripture that says stand up for those who cannot stand up for themselves, and one of the ways that can happen is at a lunchroom table. You took the time to make them feel special.”

This story serves as a reminder to reach out to the lonely people we see every day. Remember, try to bring light in other people’s lives.