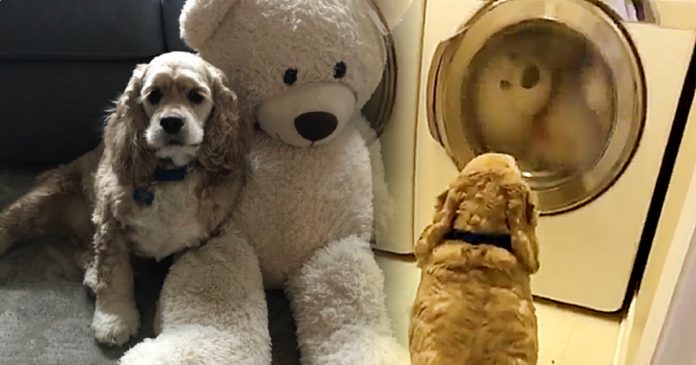 A dog can be one of the most compassionate and kind animal that you will ever meet in your life. Habs, the cocker spaniel is no exception. When he found out that his favorite stuffed toy is missing, he must have been very anxious after figuring out that it was in the machine.

This is Habs, one of the cutest and loving dog you will ever know.

Realized that spinning alone inside the dim light machine might have been a little scary, Habs sat still in front of the dryer for the whole wash time and patiently waiting for the stuffed bear to be done.

Habs must have figured out that his best friend might need an extra support system and waited for it.

Habs owner, Jacqueline Estey explained that he loves his oversized stuffed bear very dearly. The bear actually belonged to Jacqueline but we can clearly say it is no longer her’s now. Habs seems to claim the teddy bear as his best friend ever since he joined the family three years ago.

Habs and his stuffed bear are closer than brothers.

“Habs has always been inseparable from the bear. He likes to bring the bear all around the house. If you pick it up, he’ll follow you around until you put it back down for him,” Jacqueline explained.

“I have never seen him do that for anything in the wash, other than his bear. It was hilarious when I realized he was sitting there for the whole entire cycle and wasn’t moving for anything!”

You can watch Habs worried back while waiting for his friend here;

my dog has a stuffed bear that he always hangs out with and he sat in front of the dryer the whole cycle just to make sure he would be okay?? pic.twitter.com/h8gCzFUdDX

“I heard Habs scratching at the dryer door. When I went in there, he was looking for his bear in the washer and dryer! I walked him downstairs and showed him where his bear was, where he continued to lay down next to his bear,” told Jacqueline.

Habs and his favorite stuffed bear are ready for Christmas!

We’re glad that Habs can stop worrying over his stuffed best friend now and wish they have a good time together!

Man sings and plays guitar but it is his talented parrot...