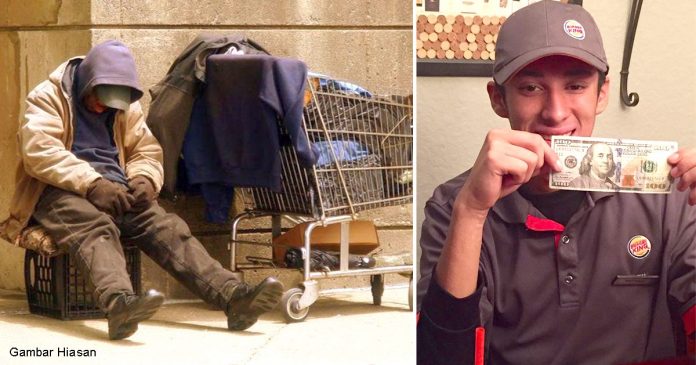 Offering help is never easy. It really comes down to just two options – ignore or go beyond your ways to help. This is not any easier when it comes to a complete stranger. But this Burger King worker called Matthew Resendez did an amazing thing helping out a homeless without a second thought.

With disheveled homeless, people might be scared, might think that other people will help them, or just worried they might use the charity we gave for drugs.

But really, what a homeless man really needs is just a helping hand.

When a homeless man walked into the premise, it was nothing new to Matthew because he is used to serving them at the restaurant. But this scruffy man approached the counter and asked one simple question.

The answer is nothing but that was not the answer that Matthew gave and he didn’t turn the homeless man away either. This boy with a huge heart forked out his own money and gave the most hearty meal to the homeless man. Such a kind heart!

A diner happened to notice Matthew’s random act of kindness and reacted to his little gesture by tipping him $100!

Matthew probably didn’t expect getting $100 in return of his kindness!

Upon hearing what happened that day, Matthew’s mother Michelle Resendez is definitely proud of her son and took it to Facebook. This is what she wrote;

“Proud mom moment! Matthew worked this evening and a homeless gentleman walked in the restaurant with .50 cents and asked if there was anything on the menu he could buy. Matthew asked him what he would order if he could and the man said anything would help his hunger pains. So Matthew rung him up for a hearty meal and then used his own debit card to pay for the man’s meal. He handed him the receipt and told him to relax and take a seat. The story could end there and It would be a happy ending, but apparently a women watched my son during his random act of kindness. Not only did she write the company to let them know about the caring employee they had working for them, she also rewarded my son with a very generous tip! So proud to be his mom and I can pat myself on the back knowing that I’ve played a part in raising this big-hearted young man.”

Treated everyone with respect despite their social status, Matthew really did make his family proud.

I would be proud too if he’s my son! Matthew might think as it was nothing, but that small gesture means the world to the homeless man. What he has shown is nothing short of compassion and kindness.

Would you do the same?