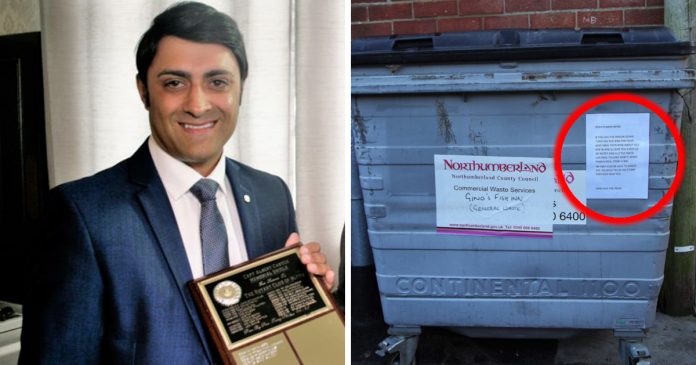 Shad Saleen owns a fish and chips restaurant called Gino’s Fish Inn in Blyth, England. Every morning he noticed the food trash bin lid outside of his shop is opened even though he made sure it was closed every night.

Shad’s shop sells all the food that you love.

Curious about what actually happened, this restaurant owner checked his surveillance camera recordings and saw a man rummaging through his rubbish bin. The man looks homeless and was searching for something to fill his empty stomach.

The garbage bin at Shad’s shop.

Looking at that heartbreaking scene, Shad didn’t think twice to get to his computer and did something nobody would have thought of. He typed a simple note and left it near his trash bin.

“Dear human being, if you are the person going through our bins for your next meal then how about you pop in and I’ll give you a bottle of water and a little snack for free, you are worth more than a meal from a bin. We may also be able to direct you to facilities in the town that may help you,” says the note.

What he wrote is just simply a random act of kindness out of the kind soul that he is.

“I know that there are people out there who perhaps need some help with problems that they may wish to keep to themselves but the offer of help is there if they want it,” said Shad.

Such an inspiring fellow! He was also recently rewarded as the Rotarian of the Year Award for his selfless contribution to the community.

When his friend, Dang saw that note the next day, he said it is not surprising as Shad always has a kind heart and frequently help the community in Blyth.

“Shad’s always been like that, so it doesn’t surprise me that he’d want to help. There are a lot of people in Blyth who do that sort of thing, it’s a real community of people who are really trying to stick by each other.”