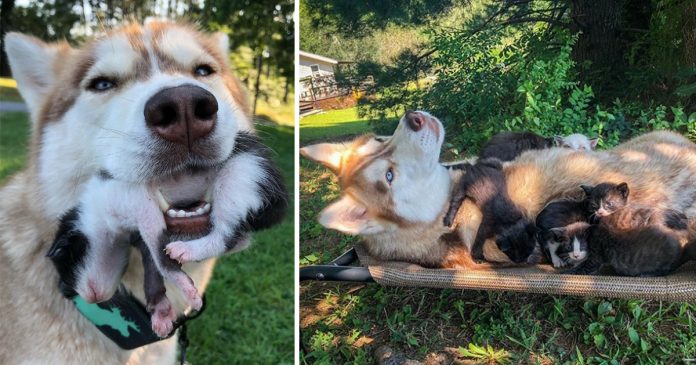 When a husky called Banner turns extremely distressed, the owner, Whitney Braley, decided to trust her dog and go along with her.

Banner was anxious to let her owner knows there’s something wrong and was trying to lead her somewhere.

Not acting like she usually does, Whitney let Banner lead her—until they arrived at the nearby woods when Banner started to circle around an abandoned cardboard box out of nowhere.

When Whitney opened the cardboard box’s lid, Banner quickly took something out from the box and suddenly came out with a kitten in her mouth! Later they found out that there are six more kittens inside the box.

Banner holds the kitten with her mouth and shows it to Whitney.

This is one of my rescue kittens. I love them all very much❤️ Disclaimer: Content exclusively managed by Caters News. For use, contact [email protected] or +61280684248.

“I was shocked. They weren’t making any noises, so I thought they might be dead. But they were all alive. Someone must have just put them into a cardboard box, closed the lid tight and left them there to die. They probably thought that no one would ever discover them,” Whitney recalled the moment she and Banner met the kittens.

Banner knew those kittens were in the box even though when they didn’t meow.

#BannersBabies #Update The babies all come to us when we call them now, they are starting to explore and play! #kittens #rescuekitten Disclaimer: Kittens will all be rehomed locally when ready so we can keep in touch. Everyone has asked about the Ragdoll baby but none of the others.

“I don’t even know how Banner knew they were in there. The kittens were freezing and weren’t meowing or anything. She just knew somehow. She is a true hero. If she didn’t find the kittens, they would have all died.”

Whitney is engrossed by how sick the people who abandon those kittens over there and let them be in a pretty bad state that they almost died.

“It makes me sick that anyone could do that to these tiny innocent animals. It’s so cruel and heartless,” said Whitney.

After making sure that all kittens were healthy and old enough, Whitney planned to send the kittens to any kind souls who wished to own kittens. But that is when she realized how different Banner has been behaving.

#BannersBabies are getting so big! Still working on clearing one little guy’s eyes up but the rest look great! They are such good babies! #rescuekitten #rescue #kittens

“She won’t leave their side. You can see her watching them all the time and counting them to make sure they’re all still there. She lays down with them, cuddles with them and takes naps with them. She is like their adopted mum and she sees them as her babies,” explained Whitney about how lovingly Banner has been with the kittens.

The loving husky is watching the kittens have their meals.

#BannersBabies got to try wet food for the first time today and they LOVED it! I’m a little disappointed they didn’t want to share 🙁 it smelled nice. #kittens #rescue #rescuekitten

“She is a really maternal and loving dog. I’ve never met another dog like Banner. But I’m so happy that now because of Banner, these kittens will go on to live their lives with loving families. It warms my heart.”

We hope the kittens find their new families very soon!

People say dogs and cats can never be together, but this beautiful husky with angel heart just prove us all wrong and happily takes care of seven cute kittens.

Horrifying moment GoPro captures a rider gets chased by a bear...

Dog overwhelmed with joy when it sees her favourite chew toy...