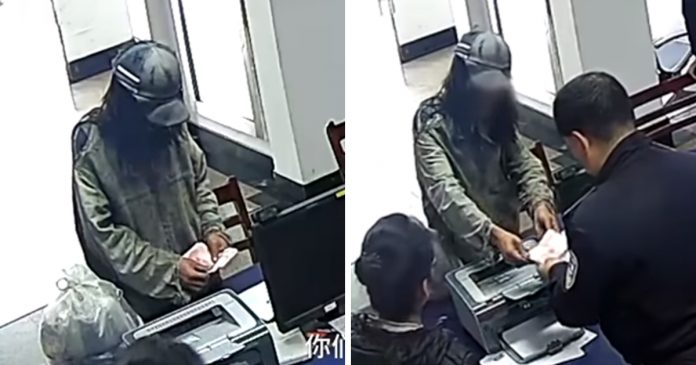 When a scruffy looking man walked into a police station, most people might think of the worst. But when this man took out his own money to donate to poor students, we are emotionally stirred.

In a police station at Zhejiang district, China, this man with a heart of gold wanted to donate 1000 yuan (about US$144) to aid an education project.

The man arrived at the police station with a determined heart to help those he thinks deserved the money more than him.

The man took out money from his pocket as soon as he reached the counter and muttered his intentions. He read from the newspapers that there are students in need.

“This is my money. Please help me donate this money,” said the good man to the police officer on duty.

“The money is legally gained. I want to help too.”

The man counted his money in front of the police officer.

He entrusted his money to the police officer.

Everyone at the scene was surprised by his action and was deeply moved upon witnessing such a touching moment. Worried that he might have donated more than he can afford, the police officer asked him a question.

“It’s winter now, don’t you need some money for yourself?” asked the police officer.

To this question, the generous man politely answered, “I can take care of myself.”

Looking at this, one of the women at the station gave the man a pack of biscuits to appreciate his unselfish gesture but he refused to accept it.

The woman insisted because she was so touched by his big heart.

A local noodle shop owner revealed that the man has never ordered expensive noodles that would cost more than US$0.55. He is extremely thrifty and was seen wearing the same torn shoes for the past one year.

The man left without leaving his name or any contact details.

Such a kind soul! Hopefully, everything will work out fine for him.

A Wife with Her Son Sees Her Husband Holding Hands with...

This inspiring school in India only accepts plastic waste as fees...