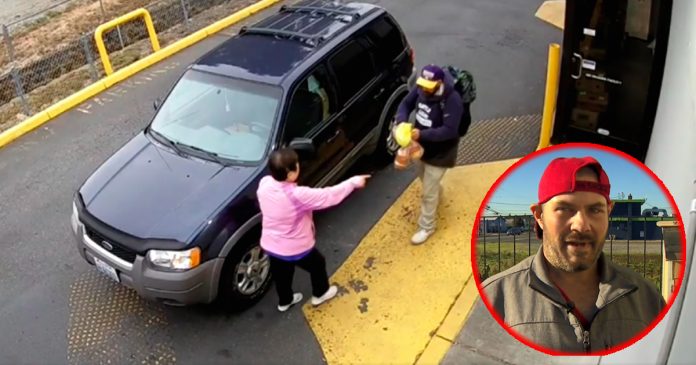 Homeless for 7 and half years, Kevin Booth from Washington found a paper bag filled with $20 bills worth $17,000 one fine morning. “Do I take off or do I stay?”—That was exactly the first thing that came into Kevin Booth’s mind when he found the suspicious brown bag in front of a food bank.

When he saw that much of money outside of the Sumner Community Food Bank in Washington, Kevin was left with such a hard decision. Having a brain tumor removed back in high school and being in a homeless state does not make it any easier.

“I had to sniff it to make sure it’s real, which it was real. I was going like who the heck would drop off that much of money at the food bank at this time in the morning?” said Kevin.

Sumner Food Bank that Kevin frequented to survive on a day-to-day basis.

In 45 minutes, Kevin might have taken it to himself—but he waited until one of the ladies from the food bank showed up. He tried to give her the bag.

The clueless lady said, “Okay, leave it by that back door,” as she pointed to the door and told Kevin.

Kevin leaving the money he found by the back door.

According to the food bank’s executive director, Anita Miller, Kevin quickly handed the bag over without mentioning much about what he had found when an employee came by to open the food bank for the day.

“We were very, very, very surprised. We just thought it was food and picked it up and went to carry it in. And then we realized it was something else and opened it. It was $17,000 in a brown paper bag,” said Miller.

Kevin knew he did the right thing.

The money was later handed to the police where they will hold the money for three months in case the anyone would turn up and claim it. 90 days later, police gave the money back to the food bank because nobody came forward and Kevin was given a portion of the money in gift cards.

“It restores all of our faith in mankind. It also shows that the people that are homeless, there’s a lot of good out there too that are just suffering from some tough times.” complimented Miller. His selfless action was praised by the police chief as well.

What would you do if you find a bag of cash?

Being homeless shouldn’t blur the line between right and wrong—and Kevin proved that. Please share this story with your friends if you agree.

A Bag of Cash

Being homeless shouldn't blur the line between right and wrong. It certainly didn't for Kevin Booth. One morning not long ago, he had a decision to make. And it was tough. But Kevin did the right thing, the honorable thing, and for that he is my Hero.(Shot by Doug Pigsleyey, edited by Darrin Tegman, and as always, thanks to producer Joan Kinsey Send your Heroes ideas to: heroes@komonews.com To see all of our Eric's Heroes stories, go to komonews.com/heroes Eric's Heroes airs Wednesdays, 6pm, KOMO News