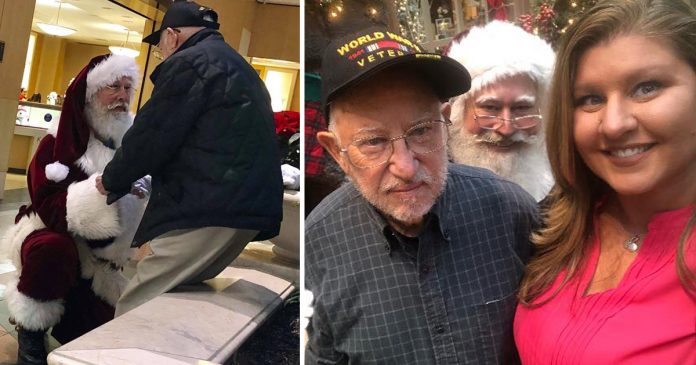 Christmas is just around the corner and we usually see kids lining up to take photos and sit on Santa’s lap, but seeing Santa getting down on his knees is definitely not something we see everyday! It was for a very special reason and the moment was captured by a shopper nearby.

Gina Wilbur happened to be sitting on a bench nearby. She was doing some Christmas shopping with her son and decided to take a break on a bench near the Santa’s workshop.

A lot of kids are eager to take their pictures with Santa when all of sudden he stood up and started walking towards Gina’s direction. Gina who thought that Santa was coming her way but he stopped short before her and went towards a man.

“I hear Santa telling the gentleman, in a soft voice, of others he knew who served. He shakes his hand with genuine gratefulness thanking him for his service and returns to the children. Best moment of my day,” Gina explained in her social media post.

He was actually walking towards 93-year-old Bob Smiley, a World War II veteran who was sitting nearby.

As soon as he reached him, Santa took a knee in front of the veteran and thanked him for serving the country and protecting the gift of freedom that we have today. They shook hands and Santa expressed his gratitude for his service. It was such a beautiful moment!

“I really appreciate it and I try to show my appreciation when they do thank me. I thank them for thinking about us. We all went, we all served. Every boy in my high school graduating class all served,” Smiley told Fox 29. He added that it was also his duty and privilege to serve.

Gina finally got herself a picture of Santa and the veteran too!

“I don’t like negative stuff. Sharing this made my day,” said Gina who can’t believe she captured that moment. We would have missed it all if not for you!

Santa has really shown us that we should always be thankful and show gratitude for what we have today.