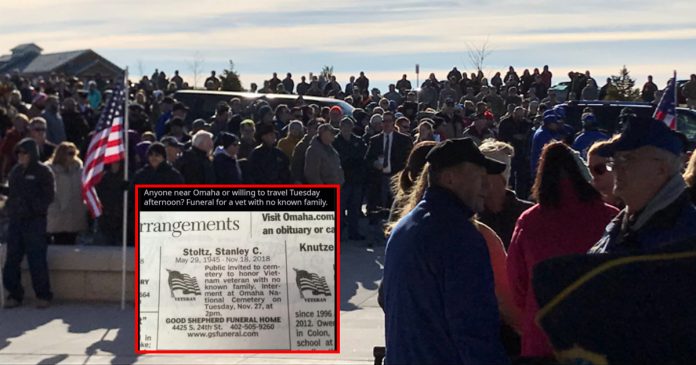 The thoughts that we are going to die alone is already so painful, what more when we have no family around us when that actually happened.

The late Private First Class Stanley C. Stoltz was a veteran drafted into Vietnam war some time ago. He was born on May 29, 1945 and grew up on a farm in Curlew, Iowa. He married twice, one died and divorced the other, and without any children.

This former soldier proudly served his country but would be buried alone, without any family members to attend his funeral.

Luckily, someone saw the notice printed by Omaha World-Herald and shared it on social media.

On the day of the funeral that will seemingly be quiet, hundreds of people brave the cold to honor this 73-year-old Vietnam veteran who is a complete stranger to them.

“He needs to be honored,” said Robert Bossung, a US Navy while holding his tears.

Hundreds showed up to honor this veteran.

Visitors thanked each other for coming to support and laid flowers and gifts on Stoltz’ casket.

The traffic during his funeral stretched along the road.

“This is the first time we’ve had this kind of crowd. Most get six to eight cars, 15 at most. This is hundreds.”, Chaplain Roy Edwards told Omaha World-Herald.

It was said that there was some family that eventually came forward that day including Stoltz’s brother, Keith. However, he was said to decline to talk to the media.

May you rest in peace, Stoltz. We’re proud of you.

Twin sisters were born one black and one white—18 years later...