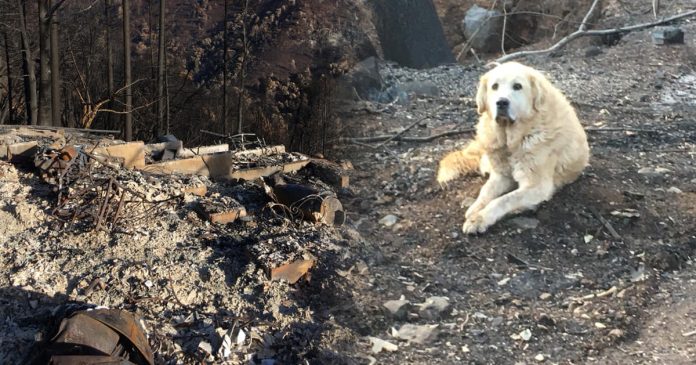 This resident of Paradise, California might have lost her home and all of her belongings, but she didn’t lose what’s most important to her—her dogs.

When the entire town was destroyed by the deadliest and most destructive wildfire in Californian history that killed almost 85 people, Andrea Gaylord was forced to evacuate the Camp Fire along with another 26,000 inhabitants.

Thousands were made homeless in that unfortunate disaster and Gaylord was unable to go back to her property and search for her two missing dogs, Miguel and Madison. Luckily Miguel was found by an animal rescue volunteer, Shayla Sullivan.

Sullivan brought in food and water to where the home once stood, hoping that she will later find Madison. She also placed an article of Andrea’s clothing near the remains of the home so that Madison could smell his owner’s scent.

Madison faithfully protecting the ruins of the house.

“I had sighted Madison a few times deep in the Canyon but knew he took his job seriously and wasn’t going to be an easy catch. After meeting Gaylord in person when I took Miguel to her, I had the idea of placing an article of clothing that would smell like her (I hugged her) to keep Madison’s hope alive until his people could return,” explained Sullivan.

The evacuation order was lifted after a month and Gaylord was finally allowed to return to Paradise. Her house was burned down to ashes, they lost everything—but then came Madison who suddenly appears to greet his owner.

Madison and Miguel are happy to meet their owner again.

Madison endured a month of fire, smoke, and storms to guard his home with so much loyalty. The dog heartwarming reunion with his owners has gone viral and touched the hearts of many people.

“Well, I’m so happy to report that Gaylord was allowed to return to her property today and there Madison was! He had stayed to protect what was left of his home, and never gave up on his people!” told Sullivan.

“Imagine the loyalty of hanging in through the worst of circumstances and being here waiting. You could never ask for better animals,” said Gaylord emotionally.

We’re glad that they are back together again!