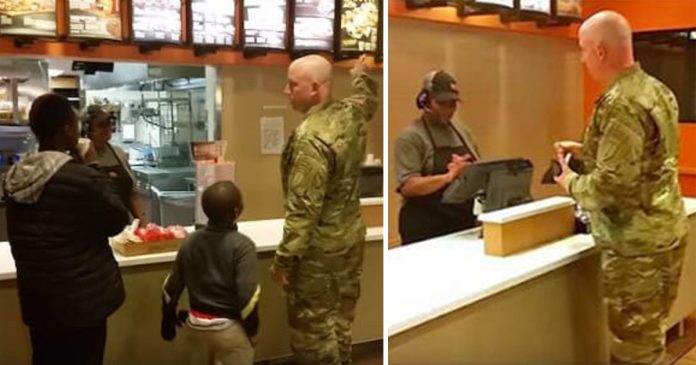 The tough and masculine appearance of military soldiers is admired by many. Almost fooled by their strong exterior, not many realize that on the inside, they are soft and warm-hearted as well.

Army Lieutenant Colonel Robert Ridson became an example of their selflessness. Big actions from risking their lives to save country to small actions from helping the community in the smallest way they can; even at Taco Bell.

Lt. Col. Ridson was on his break when he is buying his dinner at Taco Bell

The father of two was almost done making his order when he was approached by two young boys.

However, Lt. Col. Ridson noticed something was amiss. The boys looked cold from the weather and he understood that they may have come from underprivileged families.

Following his heart, Lt. Col. Ridson asked them if they have had dinner and if they were hungry.

The starving boys admitted and he asked them to order anything they want from the menu.

The video of his kind actions went viral and Lt. Col. Risdon says.“I’m kinda embarrassed and humbled by the praise and don’t need it.”

“I am a believer that we live in the best country in the world with the best people and that acts of kindness happen every day.”

If you agree with him, please share our story and remember to always be kind to one another!