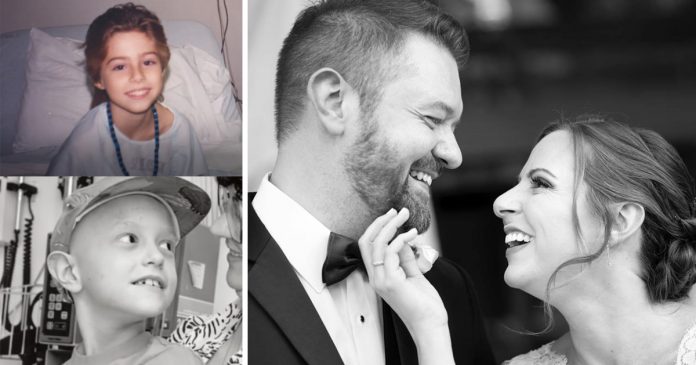 Two decades ago, Lindsey Wilkerson and Joel Alsup were cancer patients at St. Jude Children’s Research Hospital in Tennessee. Fast forward to today, the pair is grown up and have tied the knot where their loving friendship was first formed.

“Thanks to St. Jude, I was lucky enough to marry the love of my life, my best friend,” Lindsey told the New York Times. How sweet!

Lindsey was just 10 when she was diagnosed with leukemia, while Joel found out he had osteosarcoma—a bone tumor—when he was 11 years old.

The kids, who thankfully both survived their illness, quickly formed a strong bond as they fought for their lives together at the Memphis hospital, but they eventually went their separate ways.

Lindsey went to the University of Central Arkansas to study communications while Joel studied television production at a college in Tennessee.

But soon, against all odds, fate brought the cancer survivors back to each other when they both landed jobs at St. Jude’s, working for the American Lebanese Syrian Associated Charities (ALSAC), a fundraising awareness organization.

It was at the hospital where their life-long spark reignited, and in September 2016, Joel couldn’t help but confess his love to Lindsey after they watched the movie “Alien” together one evening. He was so delighted she felt the same way!

And in September, the adorable lovebirds exchanged their vows at the very hospital that saved their lives.

“During your youth, a cancer diagnosis invaded your life, but you endured and defeated it,” said Brent Powell, an Episcopal deacon and the head chaplain at St. Jude’s.

“Now you are giving back, paying it forward. You are two of the most loving people I know. It only took you 20 years to confess your love,” Brent added.

“I never imagined that my childhood crush and then best friend would ever become my husband. We’ve had the blessing of growing up together, finding a deep and loving friendship that led to finding our forever love in each other.

“I’m so thankful for every moment with him,” Lindsey said.

Their romantic story is worthy of a magical fairy tale. We’re so happy their friendship blossomed into something more. Congratulations Joel and Lindsey!

Watch the video below for more adorable images of the sweet pair: