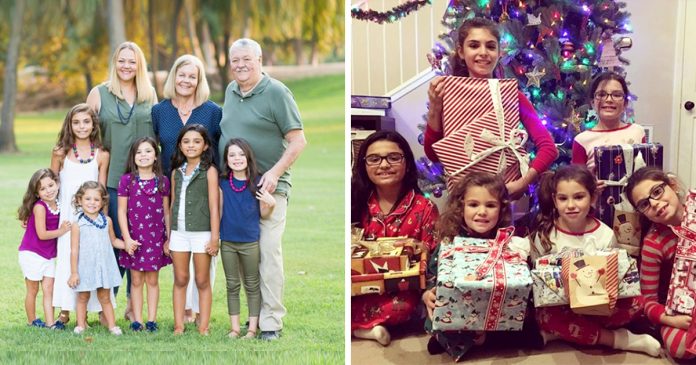 When she received an emergency foster placement call asking if she could take in four young sisters into her care that night, Lacey Dunkin never would have imagined how that split second will turn her into a mother of six.

It was September 2011—Dunkin was just in her twenties, single and still living with her parents. She completed training in foster care in June that same year when a social worker suddenly called asking her to take care of four children.

“I was barely awake, but I said yes,” Dunkin told Parents.com.

Her parents are very positive about it and encourage Dunkin to consider adopting them. Luckily, Dunkin did not see being married as a prerequisite for having children.

“They were small and scared, were bought in the middle of the night to the house of this stranger.”

After taking care of the children for nine months, all of sudden Dunkin received news saying that those children will return to live with their biological mother.

A month later, the biological mother called and asked if Dunkin could take care of her daughters once again—but along with a fifth child that was actually born the night Dunkin was called by the social worker.

Who can say no to this little bundle of joy?

Dunkin accepted the request almost immediately, but little did she know that offer comes with a bonus—the sixth child that the biological mother was pregnant with at that time.

By the end of 2013, Dunkin had formally adopted five daughters—Lea, Kaylee, Melanie, Natalie, and Sophia. She later adopted the sixth one, Cecily in 2015.

Dunkin with her daughters and her parents.

Recalling one of the moments with her eldest daughter Sophia, Dunkin shared one heartbreaking story.

“I was called into work and prepared to take Sophia to her kindergarten class. I was making her breakfast and she asked me if I had any daughters and if she could be my daughter. It broke my heart.”

“She asked what she could call me and I told her that my name is Lacey and you can call me whatever you want to call me. But by the time I found her school and dropped her off, she was introducing me as her mom.”

“I want people to know that foster children are not bad, they’re not broken. Children are resilient, and want and need a loving home.”

The girls are ready for Christmas!

Dunkin has busted the myth that singles are not suitable to adopt. Her personal advice is that parenting is not always easy and takes a village to do it.

“If you’re already a parent, you know that it’s not an easy job. It’s not something to jump into blindly, but it also grants the greatest rewards of any other job, hands down. As they say, it takes a village, and I’m so thankful for my village of family and friends who are always ready and willing to jump in when needed. If you’re thinking about fostering or adopting more than one child, I suggest you get your village ready too! I honestly couldn’t do it without these people, mainly my parents, who “parent” with me daily.”

Watch Lacey’s story for yourself and be convinced of the love that she and her parents are showering the kids with.

Who is the Mom? A 40-year-old Single Mother Looks So Much...