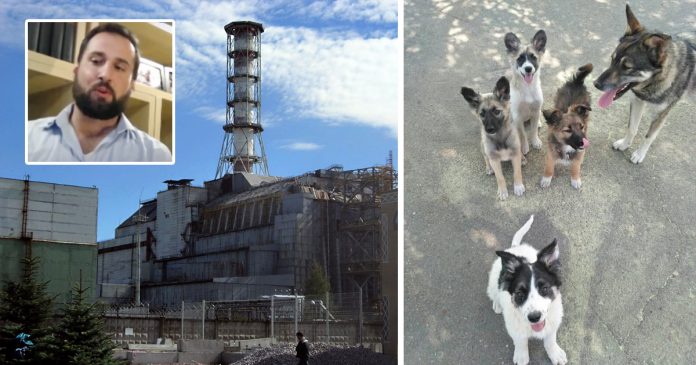 One guy is fighting to save hundreds of descendants of the poor pups abandoned during the 1986 Chernobyl nuclear disaster—and the dogs are super grateful!


When the nuclear reactor exploded in Ukraine, over 300,000 residents weren’t allowed to bring their beloved pets to safety as they were forced to flee from their homes.

This means that today their population continues to grow, with 250 of the abandoned dogs currently living in the woods around the exclusion zone, and hundreds more in the abandoned city around it.

They have nowhere to go!

Since the Chernobyl strays living in the disaster zone—which covers 30km—could be radioactive, it is illegal to rescue them—so Lucas Hixson co-founded the US NGO Clean Futures Fund, which is determined to make their lives a little easier.

Life is tough for the forgotten canine community. Every year they fight for survival during the harsh Ukrainian winters, trying to find food, water and shelter.

Because of a the higher levels of radiation in their fur, the pups have a lower life expectancy and most don’t live over the age of six.

But Lucas wants to step in and save them no matter what! He wants to make sure they live a comfortable life, and don’t have any more puppies.

Lucas told the Dodo, “We originally went over there to gain experience on how they were responding to this accident. I began to wonder, ‘what does the quality of their lives look like?’”

Together with his team of vets and volunteers, he set up several temporary clinics in the area. What a noble thing to do!

They then go out to collect dogs from the area and frisk them for radiation, decontaminate, vaccinate and sterilize them before they are released.

And Lucas knows all the hard work is worth it, because it makes other people look at the adorable dogs in a different way! The abandoned Chernobyl dogs want to be shown some love too!

The Clean Futures Fund plan to set up a feeding program, a spay and neuter vaccination campaign, and will try to talk to the Ukrainian government about potentially starting to rescue the cute dogs.

“These are our dogs and we care for them. We’ve developed special relationships with nearly every one. And we’re committed to being here for the long haul,” Lucas said.

We think they’re doing an amazing thing! You can show your support here too.

Groomers give neglected dog a makeover—after shaving off 35lb of fur,...