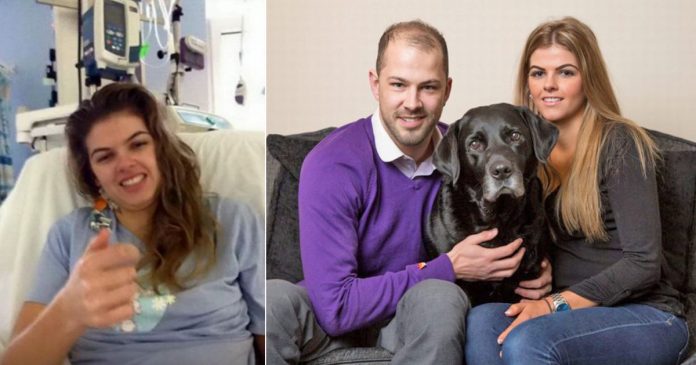 Leo the heroic Labrador saved his owner’s life whose heart stopped beating for 30 minutes when she went into a cardiac arrest while she was sleeping—the brave pup howled until her boyfriend woke up.

Joanna Mellor, a 24-year-old beauty therapist, was saved by her intuitive 5-year-old pet pooch when she suffered a sudden heart attack and stopped breathing.

Leo kept barking desperately until Joanna’s boyfriend, Andrew Rayment woke up. Andrew immediately called 999 and performed CPR on his girlfriend until medics arrived and rushed her to the Queen’s Medical Centre in Nottingham.

He received the shock of his life when they told him her heart had stopped beating for 30 minutes!

Luckily, the 24-year-old made a full recovery but was later diagnosed with Wolff-Parkinson-White (WPW) syndrome, a heart condition which causes regular palpitations.

If it wasn’t for her clever pup Leo, she may not be alive now.

“I owe my life to my dog and my boyfriend. If Leo hadn’t woken Andrew up I might not be here today,” Joanna said.

“I remember going to bed and drifting off the sleep and the next I know I’m in intensive care in hospital and told I’d suffered a heart attack. The doctors say I was technically dead because it took Andrew 30 minutes to get my heart started,” she added.

Doctors even thought she might be brain damaged from the incident.

“I’ve been on the job for 14 years and I’ve never seen anything like it. When people suffer cardiac arrests, quite often they are left with neurological problems. They don’t usually make a 100 percent recovery,” Paramedic Glenn Radford said.

Leo saved this family from a potentially tragic ending. We should never underestimate the love our dogs have for us! Well done Leo.