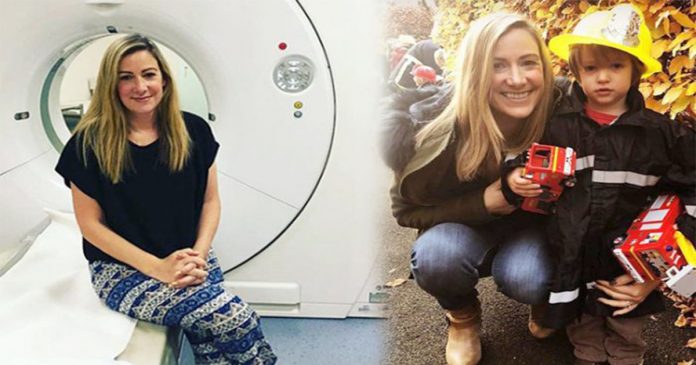 BBC presenter Rachael Bland was diagnosed with breast cancer in November 2016. Her diagnosis came after she discovered a lump under her arm. Sadly, nearly 1.5 years later in April, Bland received the devastating news that the disease is back and incurable.

The first thought that flashed through her mind was her 3-year-old son, Freddie.

For a young mother who knows she’s going to pass on in life, one worry that most likely would be on her mind is “Who’s going to care for my children?”

It would be heartbreaking to picture one’s child growing up motherless.

“I watched my little Freddie innocently playing away in a tyre in the barn and my heart broke for him,” she wrote in a blog post.

Knowing she was going to arrive at death’s door, Bland began making a heart-wrenching plan for Freddie, preparing him for his life without her.

Firstly, Bland crafted a heartfelt memoir titled “For Freddie,” in which she penned pieces of lifetime advice for her son for when he heads off to school, to work, and beyond. It contains a collection of stories and pieces of advice that any parent would want to give.

“I hope the book and these gifts and notes will leave an imprint of my love behind for the rest of his life. So he can be sure how very much I love him.”

Secondly, Bland collected Freddie’s newborn keepsakes as well as her personal mementos, such as notepads and perfume, so that he will know “what my writing was like,” and “remember my smell” when he grows up.

Thirdly, the devoted mom created a Whatsapp group with her sister-in-law. Through it, she left a list of things, instructing her on what she hopes she’ll do for Freddie.

“Like not cutting his hair too short until he really insists, or my wish for him to go to the very best school and university possible, so long as that’s what he wants,” Bland said.

Lastly, hoping Freddie is able to receive presents from her every year on his birthday till he’s 21, Bland spent her final days wrapping 18 years’ worth of gifts for her little darling.

After taking every ounce of energy she had to wrap the presents, Bland passed away at the age of 40 in the early morning of Sept. 5.

Bland’s love for her son is truly touching.

Though Bland has passed on, her spirit and legacy will certainly live on in Freddie’s heart.

The BBC presenter has died at the age of 40