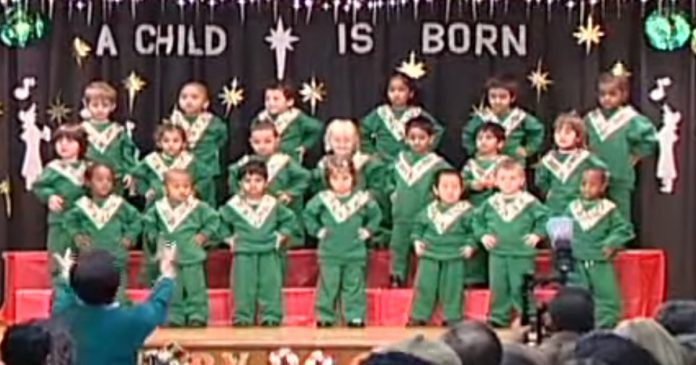 What else will give you the Christmas feeling other than Christmas tree and a recital? This footage of kids from Saint Elizabeth Child Care facility, Jersey city performing their Christmas recital is just your beginning to the Christmas joy!

In true Christmas spirit, 20 kids dressed in matching green uniforms can be seen ready to sing along to our classic favorite—Rocking Around the Christmas Tree and looked like they have the choreography ready too!

One blonde little girl right in the middle of the stage was definitely too excited for the show and can be seen starting to shake her body as soon as the curtains were pulled apart, way ahead of her peers on the stage.

She’s just too excited for Christmas!

As soon as the music starts and the moment the curtains were pulled apart, all kids jump into action and started to shake the Christmas joy off their little limbs and sing along to the song-making everyone in the hall laughing to their cute dance routine.

While the dance routine looked like a cute organized mess, one boy in the front row, second from the right looked immersed in the song and feeling his own groove, which makes his shaking routine a bit different from the rest of the kids.

He even checked how those beside him were dancing but couldn’t care less and just wanted to enjoy himself.

While everybody looked like they’re having fun, apparently not everyone seems to enjoy this fun performance as one boy from the back row, first one from the left doesn’t seem to be enjoying himself.

Having a sour expression and stood still, the boy apparently checked out the moves from his friends as he was later seen dancing happily with the rest of the kids.

He later joined his dancing peers.

This video will definitely make you smile from ear to ear!