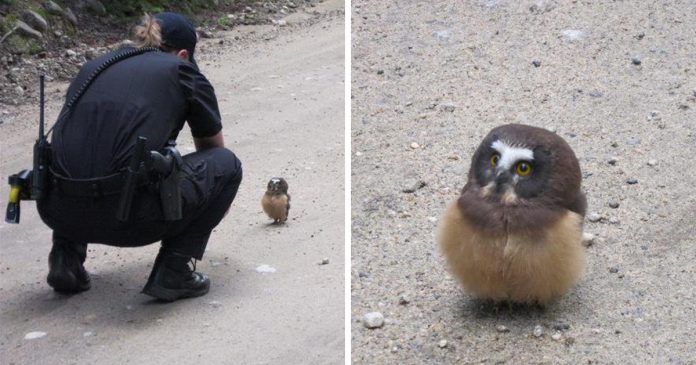 Police don’t always get involved with anything cute, but these lucky Boulder County Sheriff’s deputies just had their cutest encounter while on their usual stroll when they bumped into this cute wandering little owl.

The police officer was driving on a mountain road near the small town of Nederland, Colorado when both her colleague and she spotted a young northern saw-whet owl in their tracks. While carrying out their duty responsibly, the police officer thought that they had found a small ball in the middle of the road.

Was that a ball?

Curious of what was blocking the road, she got off the car and saw that it was actually an adorable baby owl!

The owl was standing in the middle of the road as if it lost its way while looking for Hogwarts.

The kind police officer approached the adorable baby owl and was seen talking to the small bird in the video.

“Hi. What’s up?” said the police officer to the owl.

Even when it is all alone in the woods, the owl seemed unfazed when being approached by the police officer.

It looked at her straight in the eyes!

The officer said that the cute encounter took place in the area of Rainbow Lake Campground, a few miles northwest of Nederland. However, she didn’t reveal the exact location of the encounter in order to protect the owl’s nest.

From the Twitter updates, the owl was said to have safely flown away after the adorable encounter.

Deputies came across this baby. After curious head twisting on both sides, it flew safely away. #DeputiesLoveBabyOwls pic.twitter.com/w5APBgF0Bs

What a cute encounter!