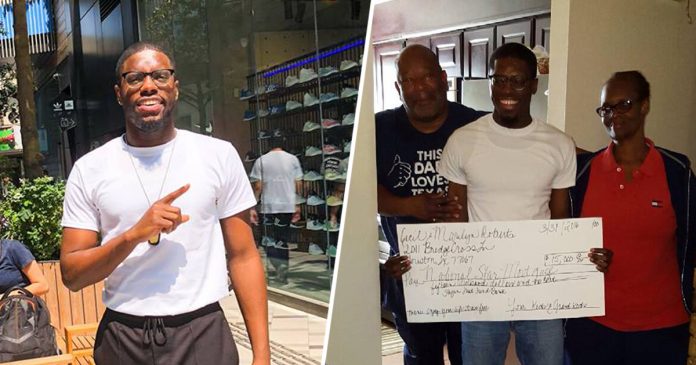 A Houston couple’s house mortgage was paid off by their beloved grandson, Stefun Darts, who could not even sleep well thinking that the elderly couple has to work day and night for the money.

During his second grade, Stefun Darts made a promise to his grandparents that he will help them pay off the mortgage of their house. Making such a serious pledge at a young age, Darts never take his promise lightly.

Darts is serious about his promise.

“I promised God in the second grade I would pay off you guys house and help you retire. A promise I would never break. I couldn’t stand you going to work at night, some nights I didn’t even sleep knowing it shouldn’t be like this,” said Darts on his Facebook post.

It was a great moment when Darts paid off the house mortgage.

Darts is a full-time student at San Jacinto College and a founder of the non-profit Caring Heart Youth. Determined to get his grandparents to retire from work, Darts scrimped and saved his money more than anyone else.

He sacrificed his teenage years and early adulthood by not going out and have fun with his friends—needless to say he has several jobs and ate microwave pizza for the past six years.

Darts literally pinched and scraped to fulfill his childhood promise and help his grandparents pay off their home.

For over 20 years, his grandparents have been religiously paying for the mortgage every month. Thanks to that, it would take just take another four years to pay off their house.

On March 2016, Darts presented a USD15,000 check to his grandparents and they could not be more surprised.

“I couldn’t believe it,” said Darts’ grandmother to KHOU.

Darts and his grandmother, Marilyn Roberts.

“To have a grandson like that is truly a blessing. He’s a very special kid and I just love having him in my life,” told Darts’ grandfather.

As for his mother, Stephanie Wyatt, she’s not surprised with his son’s generous gesture. She knew that her son has always been a generous person ever since he was a child.

Darts did good and was really proud to see the tears of joy of his beloved grandparents.

When you get the chance to experience tears of joy capitalize on it. Just payed off my grandparents house ? pic.twitter.com/nm3Gp13ZLR

“The best and most beautiful things in the world cannot be seen, nor touched…but are felt by the heart. Even with this, I could never repay you for what you’ve done for me.”

Such a wonderful grandson!