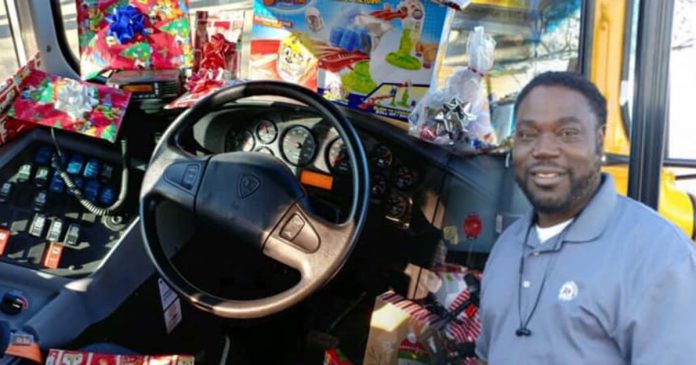 Every student who rode on Curtis Jenkins’ school bus home from Lake Highlands Elementary School was treated to a very heartwarming surprise a day before the winter break started—he knows how much it meant for him and the kids.

All the students received a present each from Jenkins who works as a bus driver for the school.

It began when Jenkins decided to host a gift exchange for the students. However, his wife, Shaneqia Jenkins pointed out that some of the students may not be able to afford to buy gifts for their friends.

Not wanting for some students to feel left out, Jenkins later changed his plan to a better one. Instead of gift exchange, Jenkins and his wife bought presents for each of the students with their own money.

Jenkins saved a portion from each of his paychecks to buy for the 70 students. “No hesitation,” Shaneqia said. “He’s always wanting to do something for the kids, he’s been talking about it for months.”

The kind-hearted bus driver has worked for Richardson ISD for seven years and this year, he saved a portion from his paychecks to buy the presents which include puzzles, games and small electronics.

Prior to buying the presents, Jenkins asked the students what they asked from Santa.

“Seeing the faces of those kids was more than anything that I could ever do with the money,” Jenkins said.

“When you’re going to school and you have a hole in your socks, that new pair of socks meant something to you,” he added.

Jenkins has definitely made the children feel loved and valued. Who knew Santa also drives a bus?

Since 5yo, girl from Pennsylvania helped raise millions to fight malaria