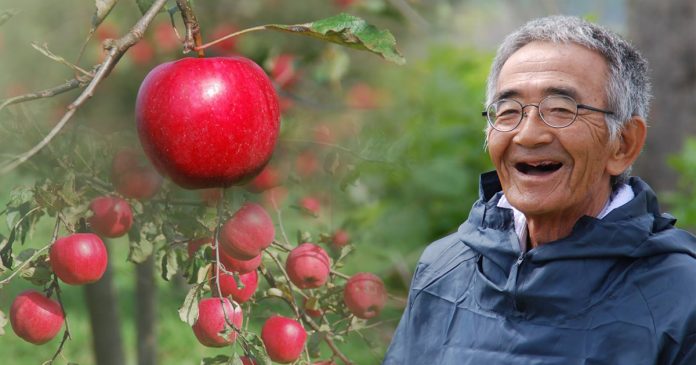 Once, Akinori Kimura was on the verge of taking his own life but it was right then when he stood at the top of the mountain that he saw something that would forever change his life.

Japanese-based apple farmer Kimura has a thriving apple farming business that is very well-known. He is sought after in Japan, Taiwan, and South Korea for his innovative organic farming techniques.

However, his success did not happen overnight. It took him eight years to finally see apple trees in his farm producing apples.

His journey as an apple farmer began after he decided to leave a full-time job at a company in Tokyo to pursue apple farming.

The then younger Kimura later returned to his hometown in Aomori Prefecture where he married his wife and started farming.

Starting his own farm was definitely not easy at first, especially when they found out that Kimura’s wife was severely allergic to pesticides and chemical fertilizers that they used at their apple farm, causing him to find other alternatives to farming aids.

Unfortunately, without using the conventional chemical pesticides, his apple trees grew vulnerable to insects and diseases.

Fast forward five years later, the situation became even worse that Kimura had mounting debt and his neighbors called him a failure.

His apple farm was failing and no one had his back even his own wife. Not able to handle the stress any longer, Kimura decided to end his life but he stopped. There, lying in front of him was a huge field of wild acorns and a thought came across Kimura’s mind.

“If I can reproduce this environment, I will succeed,” Kimura said.

The sight of the overflowing field of acorns inspired him to experiment once again. Kimura relentlessly did some research and experimented with different types of soil in used sake cups. It was in the eighth year of his farming career that one of his apple trees started to produce seven apple blossoms. That autumn, the tree produced two small apples.

He persisted in his efforts to reproduce the mountain’s ecosystem in his fields. In order to achieve this, he left his orchard overgrown with weeds instead of uprooting them. Instead of using pesticides, he placed emphasis on using beneficial insects to feed on the harmful insects. To protect the trees against bacterial diseases, he only sprinkled them with a diluted vinegar solution.

Fortunately, the following year saw Kimura’s life took a better turn. His apple trees produced more apples than ever he no longer feared about the pests.

Now, a successful apple farmer, Kimura has expanded his farming business where he grows rice and vegetables in the same way he grows his apples.

“I want to change farmers’ conventional thoughts and those of distributors and consumers,” Kimura said.

His apples will not change color even after cut more than an hour!

“I’ve been branded as strange for three decades but my way has never been improper. Japan’s food culture is on the verge of collapse. I’ll try hard to pass along the importance of agriculture and food as long as I live.”