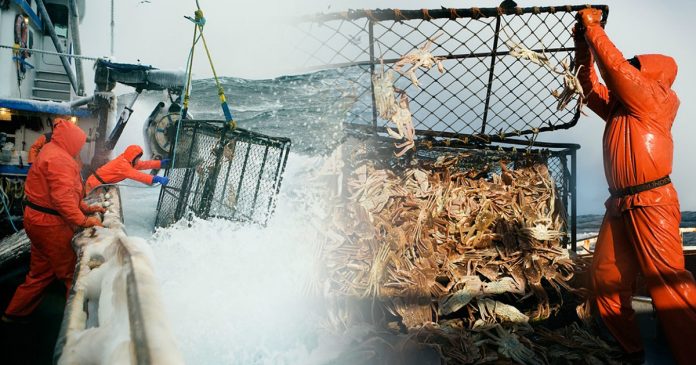 Alaskan King crabs are a delicacy and they come at a hefty price. It can cost anywhere between $30-$40 per pound but when you find out just how dangerous it is to catch, you’ll understand why the price is as it is.

Crab fishing was once claimed one of the most dangerous jobs in the world although much has been done to make the risky business safer in recent years. Despite technological advancements and all the safety measures put in place, the crabbing profession is still an extremely dangerous one.

The crew has to battle the full force of mother nature when they set out into the Alaskan waters during fishing season.

This job is so perilous that there is a TV series called Deadliest Catch which is dedicated to showcase the conditions these men have to brave in order to secure a good haul by the end of the season.

There is a designated time in which these fishermen get to go out and catch the crabs for the season and that is usually between October and January, although this period has been shortened to only two to four weeks in recent years to prevent over-fishing.

The Alaskan crab fishing profession has the highest rate of fatality with over 300 fatalities per 100,00 people.

Shockingly over 80% of these deaths are caused by drowning or hypothermia.

As it stands, crab fishing is not for the faint of heart because these men have to withstand freezing temperatures while hauling up cages weighing several hundred pounds.

Due to the short season, these men are under immense pressure to get as much as they can out of the trip and so most of them are pushed past their breaking point during the hauling period.

Injuries are common on the decks but the men need to get back on their feet as soon as they can in order to maximize their catch.

So before you complain about your job or the exorbitant price of crabs, think about these guys first.