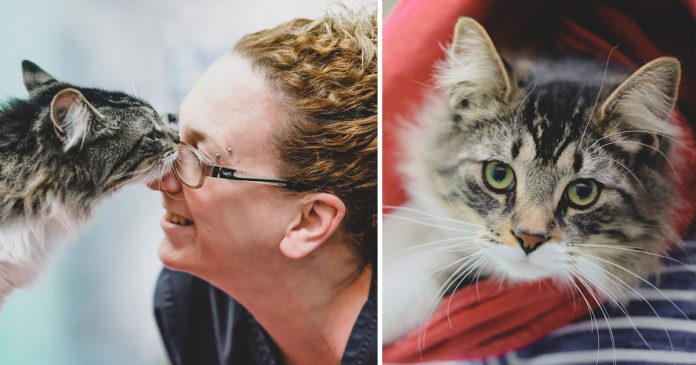 A cat named Baloo accidentally made a 17-hour journey within Canada via courier service after he sneaked into a parcel, thanks to its hiding skills.

Baloo’s owner, Jacqueline Lake was preparing to send some tire rims to her friend in Alberta.

It began when the cheeky cat snuck inside the tire rim ‘parcel’.

Lake told CTV News that she did not realize her cat went inside the box. “He got under, so he wasn’t on top. He had gotten in through the little hole of the rim down into the bottom of the box,” she said.

She did think that it was strange when the parcel weighed more four kilograms heavier than the other parcels. However, she dismissed the thought, thinking that it may be caused by the problems with the rim.

Baloo who was originally residing in Nova Scotia and was shipped to Montreal which was 700 miles away.

17 hours later when the parcel safely arrived at the Purolator office in Montreal, one of the employees became suspicious of the parcel. The driver saw some urine stain at the back of the truck so he checked the parcel for a closer look.

That was when he discovered Baloo. The company later sent Baloo to the Society for the Prevention of Cruelty to Animals (SPCA) in Montreal where the organization kindly relayed Baloo back to his hometown in Nova Scotia.

Meanwhile, Lake who had searched for Baloo for four days before she found out about his whereabouts was really grateful that the cat was found safe and sound, albeit a little bit far from their home.

“I didn’t have money to travel to Montreal to get my cat back, but we got him. I didn’t have to pay anything. It was pretty amazing they did this for us,” Lake said to CBC.

This golden retriever looks like it’s in a world of bliss...

The software engineer who rescued 735 dogs and built a farm...