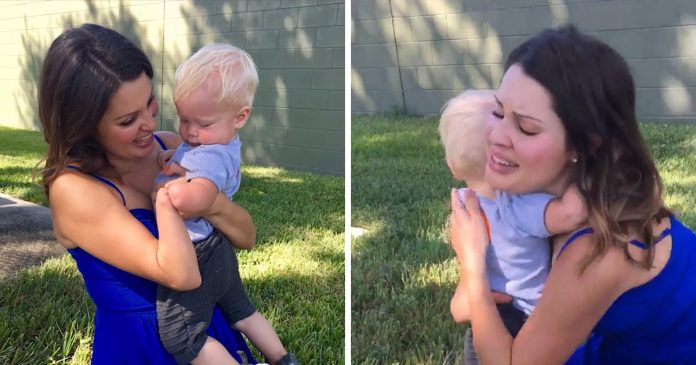 Adults often underestimate children’s ability to understand what’s happening around them. But this one-year-old boy proves the opposite.

Joseph Tidd is the son of Colleen and Miles Tidd from Orlando, Florida. This cute little angel was born with symbrachydactyly, where his left arm had not developed properly during pregnancy.

In other words, little Joseph was born with a missing hand.

Just when we thought that a child can never understand what we’re going through, Joseph proves that he totally understand how it feels to be born with a missing hand. It all started when Joseph met Amy Alamillo Siesel, 34, in a gathering organized for people born with symbrachydactyly.

When Siesel saw Joseph, she wanted to connect to the little boy by trying to give him a fist-bump with her affected arm. Almost immediately, Joseph noticed that Siesel is just like him—they both have a missing hand. So he fist-bumped back and gave her a hug!

“It left me in a flood of emotions, I think it was truly one of the sweetest moments in my life,” told Siesel.

“I wanted to see if he had the recognition that our arms were similar, and he seemed to really understand. His arm and my arm were the same. It amazes me that at his age, it was visible that he understood what was going on. It left me in a flood of emotions, I think it was truly one of the sweetest moments in my life,” told Siesel to Parents.com.

Siesel is a teacher’s aid part-time from Mexico and currently living in the US to receive her special treatment. Her limb abnormality was caused by unanticipated side effects from an anti-sickness medicine taken by her mom during pregnancy.

The Lucky Fin Project is a gathering organized to reach out and give support to people born with symbrachydactyly.

Siesel has been experiencing exclusion and rejection ever since she was growing up. She had to painfully experience kids refusing to play with her because she had no hand and cruelly told her that she should join a circus. Even as an adult, Siesel still heard people commenting on how she should wear a sweater because people will be uncomfortable looking at her.

“For every negative experience with bullying, I was blessed to find the goodness in humanity, as well.”

That is why Joseph’s hug meant a lot to her and almost had her in tears.

“When that happened with Amy, it was like something just clicked and he knew that she was like him, instantly he reached for a hug. I was in complete shock. It was like he truly understood what was going on,” said Joseph’s mother.

Joseph is such a loveable boy.

It was such a beautiful moment that a very young boy like Joseph know that he is loved unconditionally and had the opportunity to meet someone he can identify with at an early stage of his life.

Such a beautiful moment!

This lawyer received UNEP’s highest award because he successfully cleaned the...