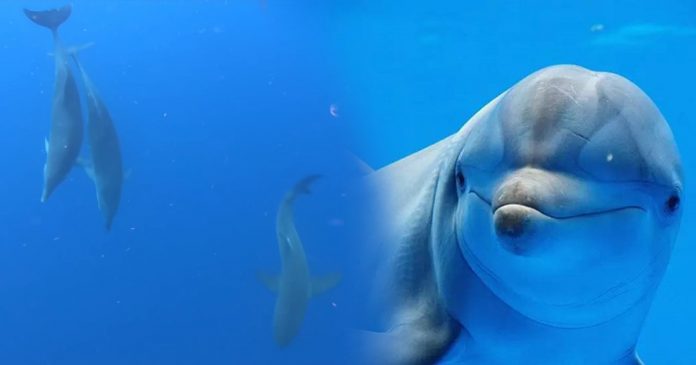 When Australian chef Dennis Tierney went for scuba diving near Lord Howe Island in the Tasman Sea, he never expected to get a deadly companion in the form of terrifying sharks. Luckily, a friendly pod of dolphins is ready to protect him from them.

In a video that has made multiple rounds on social media, a pod of dolphins can be seen driving a group of Galapagos sharks away from unsuspecting Tierney and his friends.

Tierney went out to one of the world’s remote diving spots with a group of divers when he suddenly noticed that a group of sharks was circling around his boat.

He and other divers were already underwater when they saw a pod of dolphins swam closely and circled them.

It was then that they realized a group of dangerous Galapagos sharks was circling underneath them, just a few meters deeper.

While the sharks were swimming at a distance from them, one curious shark suddenly began to swim up to the divers.

Alarmed with the shark’s action, the friendly pod of dolphins gave up playing with the human divers and quickly chased the predator away.

“There was one shark who was braver than the others and was getting closer when, suddenly, the dolphins lost interest in us and dove down to the shark and chased it away,” he told Daily Mirror.

He was skeptical about dolphins acting as protectors until he encountered this incident himself.

“I’ve heard about the myth of protective dolphins chasing away sharks but I never believed it.”

“Hundreds of feelings and emotions washed over me like fast moving water it was crazy.”

“I was amazed, felt protected and my heart was warmed—what a moment. I was super glad I videoed it because my story would be just another myth.”

Some experts came up with hypothesis that a dolphin’s kind and playful nature could be the reason we hear stories of dolphins saving humans from time to time.

Watch the dolphins chased the sharks away from the divers in this video here.

Fluffy dog stuck on the curb and ‘waving its hands’—Please help...