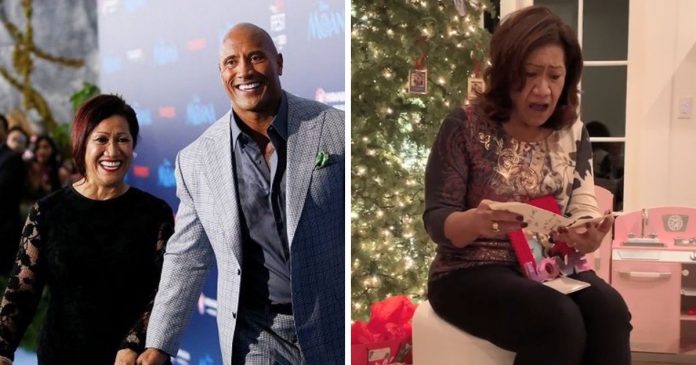 Dwayne Johnson has proved to the world how great he is at fatherhood with his adorable daughters and now, he also proves that he is a dutiful son when he gave his mother a life-changing present for Christmas.

The video shows Ata opening an envelope which contains a ticket. The 70-year-old woman proceeds to read the letter’s content before bursting into happy tears and hugging her son.

“This one felt good. Surprise! Bought my mom a new home for Christmas.

All our lives growing up we lived in little apartments all across the country. Lived like gypsies on the road from one state to another.

The first home my parents ever lived in was the one I bought for them in 1999. They divorced about 5 years later and as with life, stuff happens and things got a little complicated.

“Since then I always made sure my mom and dad have everything they’ll ever need – houses, cars etc. But the house this time is a special one and the timing is very meaningful.

I told her to treat this card like it’s “Willy Wonka’s Golden Ticket” because she gets to choose any home she wants – anywhere she wants.

I always say, if you got a good mama, then you gotta pretty good shot at becoming a decent human being. And somehow, somewhere along the line, I became one lucky SOB to be able to make stuff like this happen. Merry Christmas Ma and WOOOHOOO enjoy your new home.”

The actor always has a close relationship with his mother as she is always by his side through every step he makes in his career.

From the days when he was still in the wrestling world to when he finally made it to Hollywood, the duo stays close.

Johnson who is famous with the nickname “The Rock” is apparently not only generous with his mother. In March, he got his father a new Cadillac after he underwent surgery for hip replacement.

A few months later in July, he gifted a custom pickup truck to his cousin, Tanoai Reed to thank him for his 17 years of work.

He is definitely the living example of the old saying, “The more you give, the more you get!”

A French tourist bought food for a homeless man, turns out...