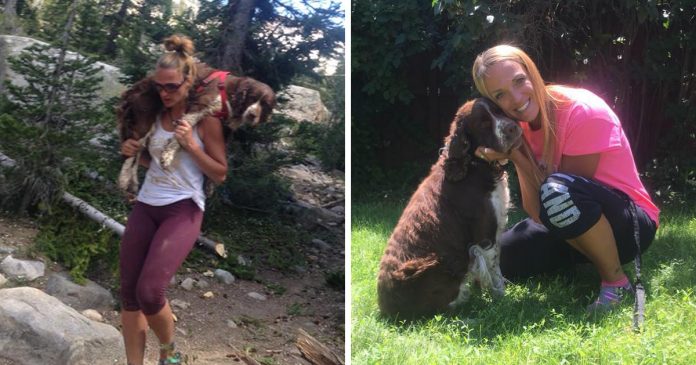 After a challenging hike to the 11,106-foot summit of Table Rock in the Grand Tetons, Wyoming, Tia Vargas was exhausted and she could not wait to hike down to meet her father. However, when she came across an injured and lost dog, she could not just ignore it.

The 40-year-old mother from Idaho Falls, Idaho met a couple of other hikers who asked her if the limping dog was hers. They were trying to find the dog’s owner as they found a note at the bottom of the trail that someone had lost their dog.

“The tag on his collar said his name was ‘Boomer,’ and I could see that he was hurt.”

“The other hikers wanted to get to the top of the mountain, so I decided right then, ‘OK, Boomer, I’ll help you,’” Vargas told People.

So, the woman carried the 55-pound English Springer Spaniel on her shoulders a mile down where she reunited with her father, Ted Kasper, 76.

Kasper waited for his daughter and did not hike to the summit because it was too exhausting for him.

Vargas recalled her father laughed as soon as he saw her carrying the dog. “He laughed and said, ‘You don’t think this hike is hard enough without carrying a heavy dog, too?’”

However, the journey back to the bottom of the trail was far from easy. Apart from having to carry Boomer on her shoulders, Vargas and her father got lost twice and they even ended up on the wrong side of the river.

Plus, the trail was heavily covered by snow and debris on that day, making her journey even more challenging. “It got to the point where my neck and legs were in so much pain and I was so scratched up and tired, I didn’t think I could go on carrying Boomer,” she said.

Vargas did not want to leave the dog behind so when she felt that she could not move further, she said a silent prayer.

“I suddenly felt like somebody had walked up behind me and lifted Boomer off my shoulders,” she says, “and I realized that I had to buck up and do this. If I didn’t get him off the mountain, I knew that he would die.”

Luckily, the trio somehow managed to make it to a safe place after the rough terrain.

Boomer was later immediately brought a vet to get treated for his injuries. The dog had a dislocated foot and torn ligaments.

Later, Vargas contacted Boomer’s owner and told them that she found their lost dog. Apparently, the former owner initially wanted to sell Boomer to someone else but since they found out that Vargas had helped saved and treated him, they let her have Boomer instead.

Now, Boomer is currently staying with Vargas as her pet dog and she could not be happier.

“I feel like there’s a reason why I was on the mountain at the very moment that he needed somebody to help. Both of us had a guardian angel that day.”