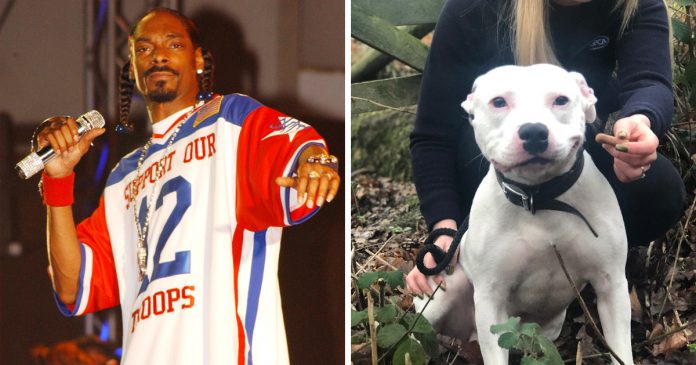 RSPCA released a video and called it heart-breaking to watch because it shows how a dog was abandoned by its owner a few days before Christmas. The video was watched by millions including US artist, Snoop Dog.

In the video, a man was seen stopping his car by a roadside in Trentham, England where he let his dog out of the car. The man got down too and together with him, he carried a ‘dog bed’ which he laid it on the road as well.

It was a white bull terrier and RSPCA vets and staff nick-named it ‘Snoop’. The poor dog was so clueless and excited sniffing around. At this moment, the man quickly ran back towards his car and lock it.

CCTV footage then showed that Snoop was jumping up and down around the car, trying to get back into the car and return to its owner.

The police posted on Twitter hoping to get more leads to catch the owner.

This is lovely #Snoop. ? @RSPCA_official will no doubt rehome him into a much more loving and caring environment. ❤️

Please, any information on the person dumping #Snoop in a cold street in #Trentham, then get in touch with the RSPCA. ??‍♂️ pic.twitter.com/NCxcYbD3hr

This incident has caused outrage and US rapper Snoop Dogg is one of them who felt sad for the dog. He even offered to adopt the pup.

“There is always room for another dog in Casa de Snoop,” he told The Daily Star.

“If he really needed a home then he has one with us,” Snoop Dogg continued. “But I don’t think there is going to be any shortage of loving homes after all the exposure he has got.”

True enough, not only Snoop Dog showed his interest to adopt the poor dog, dozens of other people such as BBC journalist Andrew Neil, expressed similar desire as well.

Snoop is currently with the RSPCA and will not be rehomed while the investigation into his abandonment is ongoing.

Snoop was discovered by a passerby after being abandoned by the roadside, and is recovering in our care. He's a super sweet boy who loves being around people, and as he's not yet available for rehoming, he's been enjoying some scrumptious snuggles with our animal centre staff?? pic.twitter.com/9WAUfzYnEm

We are relieved that Snoop is being loved and taken well care by the folks in RSPCA!

Spent the afternoon with the famous Snoop, the dog who has touched millions of hearts around the world this Christmas after he was cruelly dumped in Stoke-on-Trent. He is such a loving dog! How could anyone heartlessly abandon him? ? @RSPCA_official is still investigating. pic.twitter.com/J9r3yryHQQ

Watch the heart-breaking video here in Rachel Butler’s tweet below:

PLEASE RT! We have CCTV footage of a man callously dumping a dog in Stoke-on-Trent. The distressed dog chases after the car as it drives away. Please help @RSPCA_official find the man responsible. Awful that someone can do this! The dog is thankfully ok and now safe pic.twitter.com/AW8HNvVwdQ

Visit RSPCA’s link here to find out how you can help abandoned animals like ‘Snoop’.

Excited dog collapsed out of happiness as soon as it reunited...