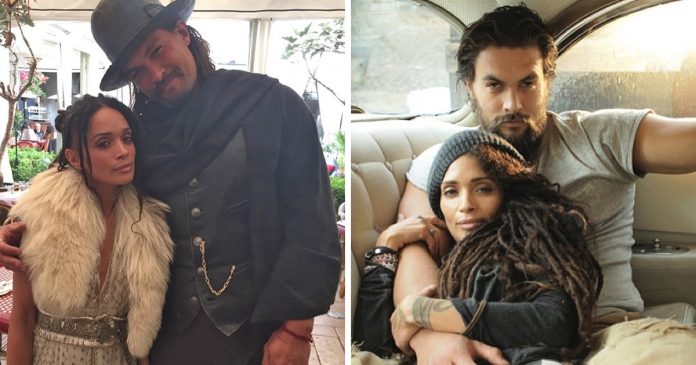 “Aquaman” star Jason Momoa and his wife Lisa Bonet may be one of Hollywood’s powerful couples who like to keep their private life personal but following their secret marriage in 2017, Momoa has been sharing some sweet moments about their relationship.

Even though Bonet being 11 years his senior, according to Momoa, 40, their love story began way back when they were young. Or at least to Momoa.

In an interview with James Corden on The Late Late Show, the actor shared the moment he first fell in love with his wife and it was when he was only 8 years old.

“Listen it was more than [love at first sight]. Ever since I was 8 years old and I saw her on the TV I was like, ‘Mommy, I want that one,'” Momoa said.

“I was like, ‘I’m going to stalk you for the rest of my life, and I’m going to get you.’ I’m a full-fledged stalker.”

“I didn’t tell her that until we had two babies—otherwise, I’d be creepy and weird. I’ve always wanted to meet her. She was a queen, always,” he added.

Yeeahh! you can check out the first 12min of the #theredroad here http://www.buzzfeed.com/jacelacob/sundance-channel-the-red-road-opening-sequence also photo via this week’s #entertainmentweekly pick up the issue for the interview!

It was not until 2004 that Momoa’s feelings evolved into something more than just a crush. The two finally met for the first time through mutual friends at a jazz club in Los Angeles.

“I literally turned around, I was with my best friend, and I see her and I’m just like—,” Momoa recalled being unable to keep a straight face when he saw Bonet.

“She goes, you know, ‘I’m Lisa.’ I was like, I turned around to my friend and was like, I had f—— fireworks going off inside me, man!” he shared.

Luckily, the feelings were not one-sided. After the meeting at the jazz club, Momoa and Bonet stopped at the 101 Coffee Shop for a drink and the rest is history.

“In that moment, love came and it came big, and he did not run as I think a lot of men do,” Bonet told Porter Magazine.

“He basically picked me up and threw me over his shoulder, caveman style!”

Bonet who is also an actress already has an older daughter, actress Zoë Kravitz, 30, whom she shared with her ex-husband Lenny Kravitz.

This gorgeous South Korean model looks so young but she is...