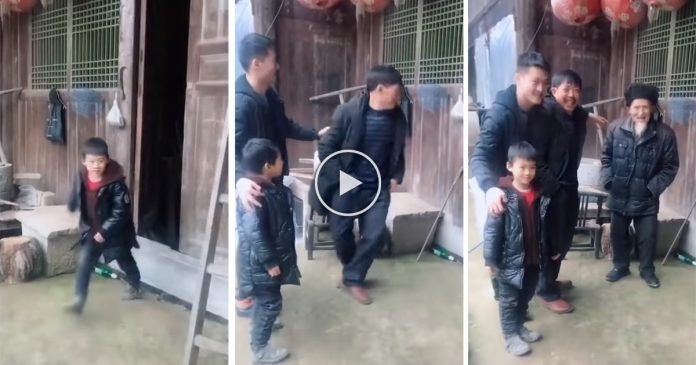 2019 has just taken off and it looks like there has been already a new meme going viral on social media worldwide!

Probably the first meme to start off this new year is the latest meme from China, featuring an incredibly adorable content: four generations of a family.

The setup of the latest meme is quite simple. It begins in the order of the youngest generation of the family appearing in front of the camera which is the child followed by the parent, the grandparent, and the great-grandparent.

this Chinese four generations meme is so wholesome omg pic.twitter.com/bozR6rB93w

It may look pretty simple but the idea of getting everyone representing four generations of a family is nothing short of total amusement!

At the moment, the netizens are going wild over the meme challenge as thousands of people in China took the adorable “four generations” meme challenge and shared their version of the meme on the internet.

There’s also the ‘dad’ meme where the son would call his dad, who then calls the child’s granddad and finally great granddad came out laughing as he walked into the screen slowly with his walking stick! It is such a blessing to be able to take up this challenge.

Watch a short compilation of the memes here:

Apparently, the “four generations” meme challenge which started from China has spread around the worldwide with netizens from India, Peru, and Norway taking up the challenge!

Our four generations all the way from India 😉 pic.twitter.com/uSjqqZ3Pjw

And the netizens are just loving it.

With some wrote how the meme reminded them of their grandparents.

This delights me and makes me miss my grandmother. https://t.co/nwfvdSrVft

Looking at how the internet just loves the meme challenge, this might be the best meme so far!